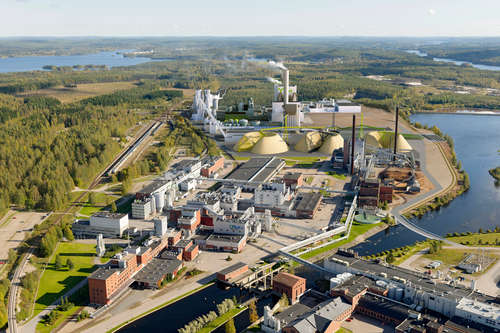 The bioproducts mill of Metsä Fibre in Äänekoski, central Finland, is a good example of how the forest industry supports regional economies in Finland from little towns to deep countryside, where there usually are no other employers working under the conditions set by the world market. Photo: Metsä Group

People in Finland value forest industry because of the export and tax revenues that it brings. According to Finns, forest industry also manages its environmental responsibility better than other branches of industry.

According to an opinion poll commmissioned by the Finnish Forest Industries Federation, Finns value the role of the forest industry as the backbone of Finnish economy. No less than 85 percent of the respondents consider it significant for the safeguarding of export and tax revenues.

In addition to this, 83 percent thought that the statement ”generates employment and welfare in the whole of Finland” describes the forest industry very well or fairly well. Most of all, the forest industry is seen as an actor that strengthens regional economies: this was the opinion of 70 percent of the respondents.

Finns are also confident about the forest industry’s success in the future. Of the respondents, 86 percent thought that the significance of the forest industry for the national economy will increase or at least remain the same during the next ten years. The branch is seen to promote national economy in a responsible way, and this was the opinion of both young and older age groups.

One third of those responding estimated the forest industry’s share of Finland’s exports correctly: around 20 percent. Close to half thought that it is larger.

Another thing inquired about was the employment effect of the forest sector as a whole, and it was estimated correctly by about one third of the respondents: 140,000 jobs, but on an average, the number of jobs was estimated to be somewhat lower.

Good reputation in environmental matters and as employer

The results are well in line with the Metsä ja puu (Forest and Timber) opinion poll that has been carried out by the Finnish Forest Association regularly since 1993. In this poll, the forest-related opinions of Finns are inquired about by over 30 questions covering several different angles, and the support gained by the forest sector is always on the level of 60–80 percent.

The majority also considered that the forest industry respects its employees. in terms of the future of the branch it might, however, be significant that the reputation as an employer was lower than the average among respondents below 35 years of age. Results surprised the industry itself

The results were so positive as to surprise even the Finnish Forest Industries Federation itself: ”And what is essential, Finns are well informed about, for example, the forest sector’s share of exports,” said Timo Jaatinen, Executive Director of the federation.

According to the poll, over 60 percent of the respondents said they place the highest trust in researchers as a source of information on issues related to the forest industry. The next best were the authorities, the Finnish state forest company Metsähallitus and the media.

The opinion poll of the forest industry was carried out by the Taloustutkimus research company via its Internet panel in the beginning of June. Close to 4,000 Finns between the ages 18–79 responded. The statistical error margin is one percentage point or less in both directions.

Nordic countries strive to limit carbon footprint of buildings - Minister @MikkonenKrista says that the Nordic countries aim to be pioneers, not just in the EU, but also globally, in terms of #lowcarbon and #circulareconomy. https://t.co/oJhUh4oWFy