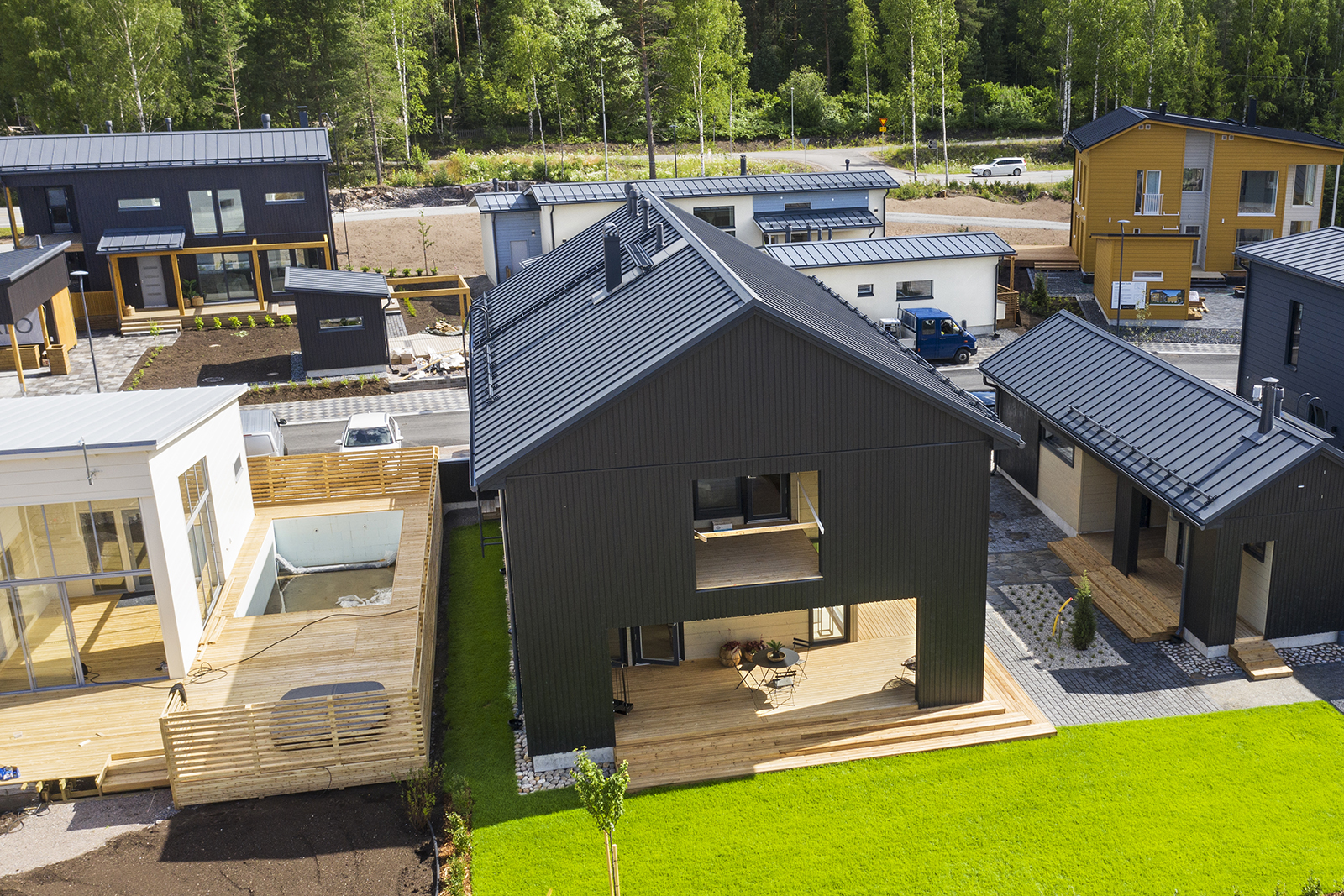 A housing fair in Finland 2020 displayed the total emissions of each building. Photo: Kari Kohvakka

European countries have diverse ways and reasons of promoting wood construction. The European Union has also announced its desire to see more of wood construction, though no joint promotion projects exist so far. However, in some regions, such as the German-speaking and the Nordic countries, forces have been joint with a view to collaborate or harmonizing construction codes.

The Nordic countries are not so much focusing on wood construction as on low-carbon construction.

‘The Nordic countries are planning to harmonise their legislation in the near future,’ says Krista Mikkonen, Finnish Minister of the Environment.

Rather than dealing with construction materials, the resulting legislation would concern the carbon footprint of buildings across their entire life span.

‘It wouldn’t mention individual heating methods or construction materials such as timber. The purpose is just to curb the carbon footprint,’ says Mikkonen.

Life span would be examined comprehensively, starting from the manufacturing and transport of construction materials. In addition to the actual construction process, the carbon footprint of the use, renovation and demolishing of the building would be included, as well as the recycling and processing of construction waste.

In a country where the matter rests with the ministry of the environment, the main interest lies on environmental issues. If the ministry for economic activity is in charge, the goal may be something like safeguarding the vitality of rural areas.

‘Things are set up very differently in individual countries,’ says Simon Mahringer, Dipl. Arch. ETH, who has completed a report on the matter for the Finnish Ministry of the Environment.

According to Mahringer, different measures are in place due to the different preconditions of the individual countries, for instance, in terms of the forest stock itself, the construction industry, the construction process, the status of digitalization, building traditions, financial resources and so on.

Mahringer says it is important to ask about the concrete goals of promoting wood construction.

‘If the European Union wants to promote it on the Union level, we should know why this is wanted and who should be responsible for it in the member states,’ says Mahringer.

Mahringer requested information from 31 countries. Of them, totally 13 either did not answer of have, or are not even planning a nationwide project of any kind to promote wood construction.

Mahringer stresses that his report, prepared in 2020, is not a scientific study.

‘I am a practical architect,’ he says.

Wood construction is more often promoted as a part of bioeconomy

There are good examples of regional cooperation outside the Nordic Countries, too.

‘One example is the collaboration between German-speaking countries – Germany, Austria and Switzerland,’ says Mahringer.

Then again, the promotion is often part of a more extensive programme, such as a bioeconomy strategy.

‘The focus is shifting away from the construction sector towards a larger context, such as environmental protection. The aim is to use natural resources as effectively and sustainably as possible,’ says Mahringer.

The good thing is that wood construction is considered as part of a bigger picture and as something included in the systemic move of society towards bioeconomy. This makes it easier to identify, for example, bodies with the ability to buy the surplus sapwood from sawmilling, which is essential for profitable sawmill operation.

So far, it has been the pulp industry that has the best ability to pay for sapwood. In Finland, for example, the thumb rule is that by selling the chips made of sapwood to the pulp industry, a sawmill can take care of its payroll costs.

Including wood construction in various bioeconomy strategies may also have negative effects.

‘Many technological and constructive advantages of wood construction and its different architecture may then receive less attention,’ says Mahringer.

‘Cities are critical for the future of wood construction’

However, Mahringer doubts whether rural areas will be crucial for the future of wood construction. ‘In my opinion, cities will become an important driver or catalyst for promoting and actually implementing wood construction,’ says Mahringer.

According to Mahringer, tools such as the zoning plan or land allocation give the cities a comparatively free hand to directly promote and also implement wood construction. As an example he cites the residential area Prinz-Eugen-Park in Munich, which has also been an international success. Mahringer considers it a good example of how increasing environmental awareness supports wood construction.

The closure of Berlin’s Tegel Airport will allow the construction of the new Schumacher Quartier residential area, a model area for modern timber construction.

The 1,800-dwelling Prinz-Eugen-Park has inspired Munich to initiate the construction of a new wood-built residential area that is even larger. According to Mahringer, there are similar developments also in Hamburg and Berlin, where the planning of the Schumacher-Quartier, the largest settlement in the world to include only wooden buildings, is in progress.

Away from branch-specific silos

In German-speaking countries in particular, the strive is from branch-specific silos, so-called cluster initiatives, towards inter-administrative solutions. Regional networks linking the construction industry and its stakeholders are becoming increasingly important.

‘They have learned that a structural change within the building sector is very complex and can only succeed if all key ministries and stakeholders are involved in real time,’ says Mahringer.

France has decided that starting in 2022, half of all materials used in public construction must be either wood or other material classified as sustainable. In public buildings higher than eight storeys the load-bearing structures must all be made of wood.

In Germany, both the federal level and a number of the states, including Baden-Württemberg, North Rhine-Westfalia, Rhineland-Palatinate, Bavaria, Hesse, as well as numerous cities are either planning or implementing significant projects to promote wood construction.

In the Netherlands, on the other hand, the national environmental centre (Milieu Centraal) does not even mention wood construction, even though one of its tasks is to promote sustainable and environmentally friendly solutions, also in construction.

From energy-efficiency towards sustainability

The Nordic countries have by now passed decisions following these new directions. An ‘environmental certificate’ for buildings will be compulsory in Sweden from 2022, and in Finland a  government proposal on a report of the climate impact of buildings will be sent out for opinions during the coming spring.

‘This is particularly true for challenging projects, such as high-rise residential buildings and public spares. In addition to this, new projects are examined, such as parking garages,’ says Programme Manager Petri Heino from the Finnish Ministry of the Environment.

Heino notes that improvements have taken plazce across the entire chain.

‘Those who commission wooden buildings, as well as the designers, researchers and the industry itself, have gained more competence in recent years,’ Heino says.

Setting limits to the carbon footprint signifies a new beginning. Until now, improving the ecology of construction has focused on energy efficiency.

‘The result has been more materials, more technology and more use of electricity, all this in the age of concrete, plastics and fossil energy. Sustainability and circular economy have been completely ignored,’ says Heino.

Liberty of construction market concerns in the north

Minister Krista Mikkonen says that the Nordic countries aim to be pioneers, not just in the European Union, but also globally, in terms of low-carbon and circular economy. From the viewpoint of wood construction, it is significant that the Nordic ministers are concerned for the freedom of construction markets in Europe.

A press release of the Finnish Ministry of the Environment published in September 2020 says that ‘a challenge on the practical level are the different construction codes of the member states; at worst, they cause obstacles to trade both within the Union and between the Nordic countries’.

Last spring, the Nordic countries set up a steering group to coordinate the harmonisation of construction codes.