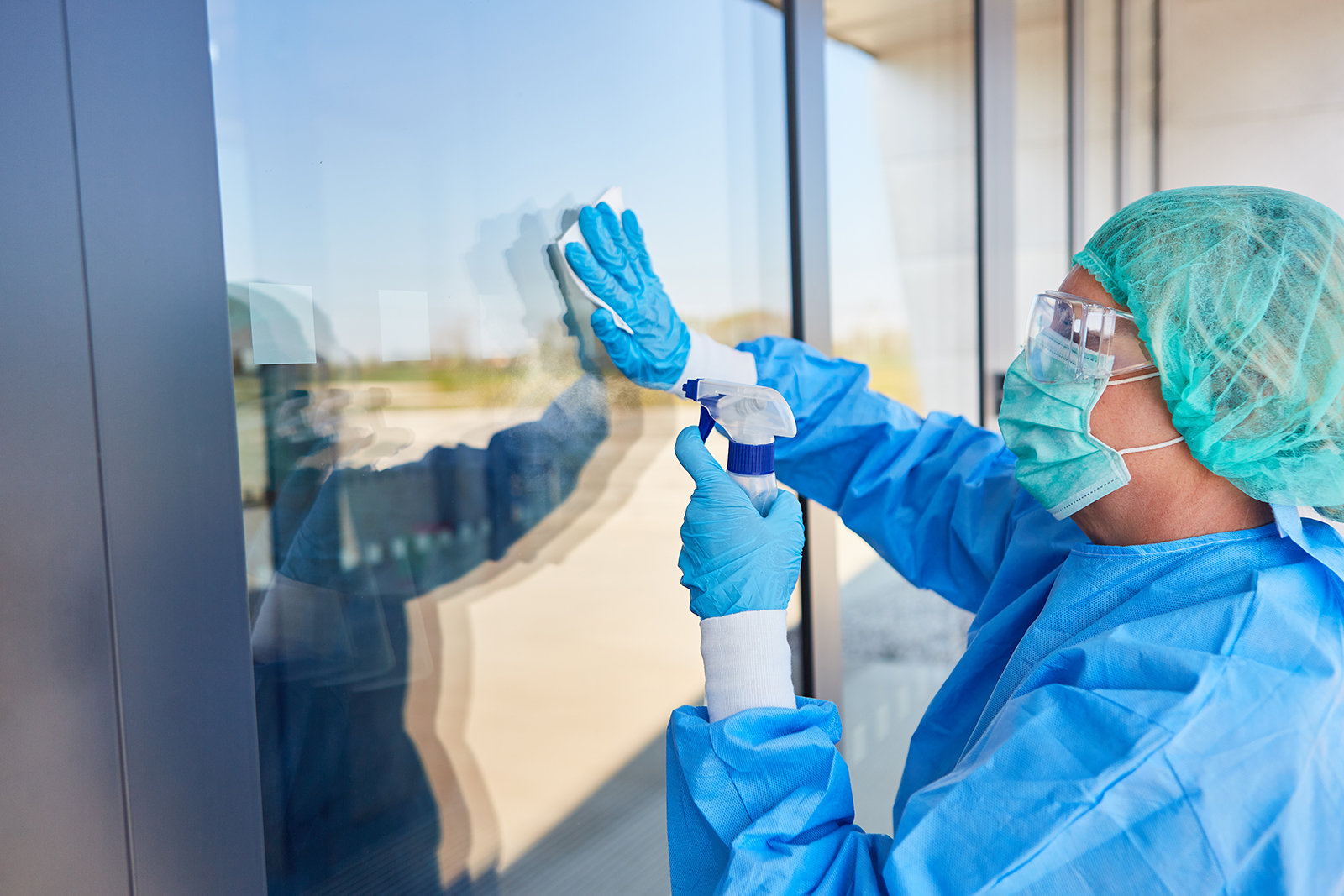 According to recent research, the use of wood in construction could play a significant role in hospital hygiene. Photo: Shutterstock

Wooden surfaces have twofold hygienic properties: Even when dirty, wood destroys bacteria clearly better than glass, for example. Coronaviruses, too, lose their contagiousness fairly rapidly on a wooden surface, compared to something like plastics.

The survival of viruses on wooden surfaces is studied in a project started last summer by the universities of Eastern Finland and Jyväskylä. The first tests would seem to indicate, among other things, that the contagiousness of coronaviruses decreases much more rapidly on a wooden surface than on other materials, such as plastics.

Paperboard and paper, too, appear to perform better than plastics against coronaviruses, though the viruses do survive longer on them than on wood.

‘This shows that there are good grounds for not using paper money during a virus epidemic and for maintaining good hand hygiene,’ says Associate Professor Antti Haapala from the University of Eastern Finland.

Plastic is not an ideal solution, either, so when paying with a card, the best methods are those that do not require the card to be passed from one person to another. Even then you should always wash your hands on coming home at the latest.

Coronaviruses can also spread via surfaces

The data on contagiousness says nothing about how likely an infection is. The most likely way of catching the virus is still by air.

‘Since last spring, however, findings have been published showing that coronaviruses can survive on surfaces for hours, days and even weeks. So we felt it necessary to study how long they remain contagious on different surfaces and in different conditions,’ says Haapala.

The project compares the survival and contagiousness of viruses on wooden and wood product surfaces, both treated and untreated. It also studies packaging materials and paper products, as well as glass, stone, plastic and textile surfaces.

‘You could say we’re studying all of the surfaces that people will come in contact with in their daily lives,’ says Haapala. The contagiousness is studied under varying periods of time, temperatures and degrees of humidity.

The project will run until the end of 2021, and by then it is hoped that the fight against the current pandemic will at least partly be won, thanks to one or several vaccines. Because of this, the project also studies the contagiousness of several other viruses. In addition to SARS-CoV-2, the cause of the current pandemic, the study includes the MERS and HcoV coronaviruses and TGEV, a coronavirus that infects pigs.

In this way it is hoped that the study can be of help if and when the next pandemic lands upon us.

Viruses do not thrive well on wooden surfaces, but the same goes for bacteria, too. In her doctoral thesis, Tiina Vainio-Kaila from VTT Technical Research Centre of Finland found that in particular, extractives in the heartwood and sapwood of Scots pine, but to some extent also those in Norway spruce prevent the growth of several pathogenic bacteria, including the MRSA bacterium (Staphylococcus aureus), which is often behind hospital-acquired infections.

However, no single extractive compound alone can explain the antibacterial effect of wood. ‘This is true for pine and spruce at least, the two species that I’m most familiar with,’ says Vainio-Kaila.

Vainio-Kaila continues to say that particularly resin acids, which are found in both the heart- and sapwood of pine and spruce, have been found to be antibacterial. Other substances known to be antibacterial are certain stilbenoids only found in pine heartwood.

‘Certain combinations can also enhance the effect. Some substances can reciprocally intensify the effect of one another’ says Vainio-Kaila.

The Puhdas puu [Clean Wood] study made at the South-Eastern Finland University of Applied Sciences (XAMK) found that even birch appears to have antibacterial properties, despite being different from pine and spruce in many respects, also as regards the extractives it contains.

Project Manager Olli Paajanen says that further study of birch properties would be worthwhile, since it is commonly used in furniture and releases smaller amounts of volatile hydrocarbons than conifers do.

Another material with antibacterial properties is lignin. Unlike the extractives, which may disappear by leaching or evaporation or may be transformed into other substances, lignin stays put.

‘So it’s likely that even an aged wooden surface is antibacterial, but how strong this property is compared to a fresh surface is something we should study more,’’ says Vainio-Kaila.

Fresh wooden surface, in particular, emits volatile hydrocarbons, which also causes the smell of fresh wood. In high concentrations, these have also been found to destroy some bacterial pathogens.

Dirt says nothing about the amount of bacteria

The XAMK project studied the effect of cleaning, dirt and surface treatment on the antibacterial properties of wood. It was found that untreated wood destroys bacteria clearly better than glass or wood treated with wax or varnish.

In measurements made at XAMK, the number of bacterial colonies on glass surfaces was 7-fold compared to pine heartwood. After two hours, the numbers had decreased, but the difference was still of the same order.

After 24 hours the difference had gone down to about threefold. On treated wood, the antibacterial effect was significantly weaker.

The study also examined whether a wooden surface would be appropriate in spaces requiring a high level of hygiene and cleanability. To do this, the team had to define what they meant by ‘clean’.

‘There are three definitions: the number of bacteria, the amount of dirt and whether the surface looks clean,’ says Paajanen.

The cleanability measurements were carried out by Ramboll Finland. The surfaces were smeared with tomato ketchup and cleaned, and this was repeated five times in a row. Organic dirt and bacteria were measured before and after each cycle of smearing and cleaning.

Paajanen therefore points out that assessing the microbiological cleanness of wood visually is difficult.

Wood works in hospitals – though not everywhere

Perhaps wood might be a good material to improve hospital hygiene? According to Vainio-Kaila, there are many kinds of surfaces in hospitals.

‘I’d assume that they are not all cleaned equally frequently or intensively. Wood might be a good choice for surfaces which are touched and washed infrequently. I wouldn’t use it for something like door handles – copper would be my choice there,’ Vainio-Kallio says.

One solution might be a finishing treatment for wood that repels dirt while keeping the antibacterial properties.

The XAMK study used industrial raw materials. The timber was delivered by Siparila, a manufacturer of construction products. The wax and varnish were common industrial chemicals.

The bacteria studied were of two types: a soil bacterium and another that is found on human skin.

I found this article extremeky useful. I would appreciate more info about this topic! Such surveys might support architects’ arguments in using wood in bigger extent in architecture! Regards, Jakub Cigler

But for a few wood surfaces in typical building interiors (walls & ceilings), the vast majority of woodwork IS treated. 20+ paragraphs in this states, “On treated wood, the antibacterial effect was significantly weaker.” And this isn’t important?! How much weaker? Graph? What treatment(s)? While the study is admirable, how it’s presented here gives me much pause. Stay well.

Thanks for your comment. Information on untreated surfaces suggests that maybe they should not be treated at all. As to your further questions, I can guarantee that if the information you are asking would exist, we surely would have told it. The world is not, however, finalised yet.

There are many types of coatings and treatments used for wooden surfaces, and sometimes they are environmental and health hazards. However, if we want to know that wood has any natural antimicrobial properties, we have to study the untreated wood. Further, we can identify the places where we can use the natural wood with the addition of any chemical surfactant. Meanwhile, the comparative survival of various microbes on differently treated wood samples can be studied.