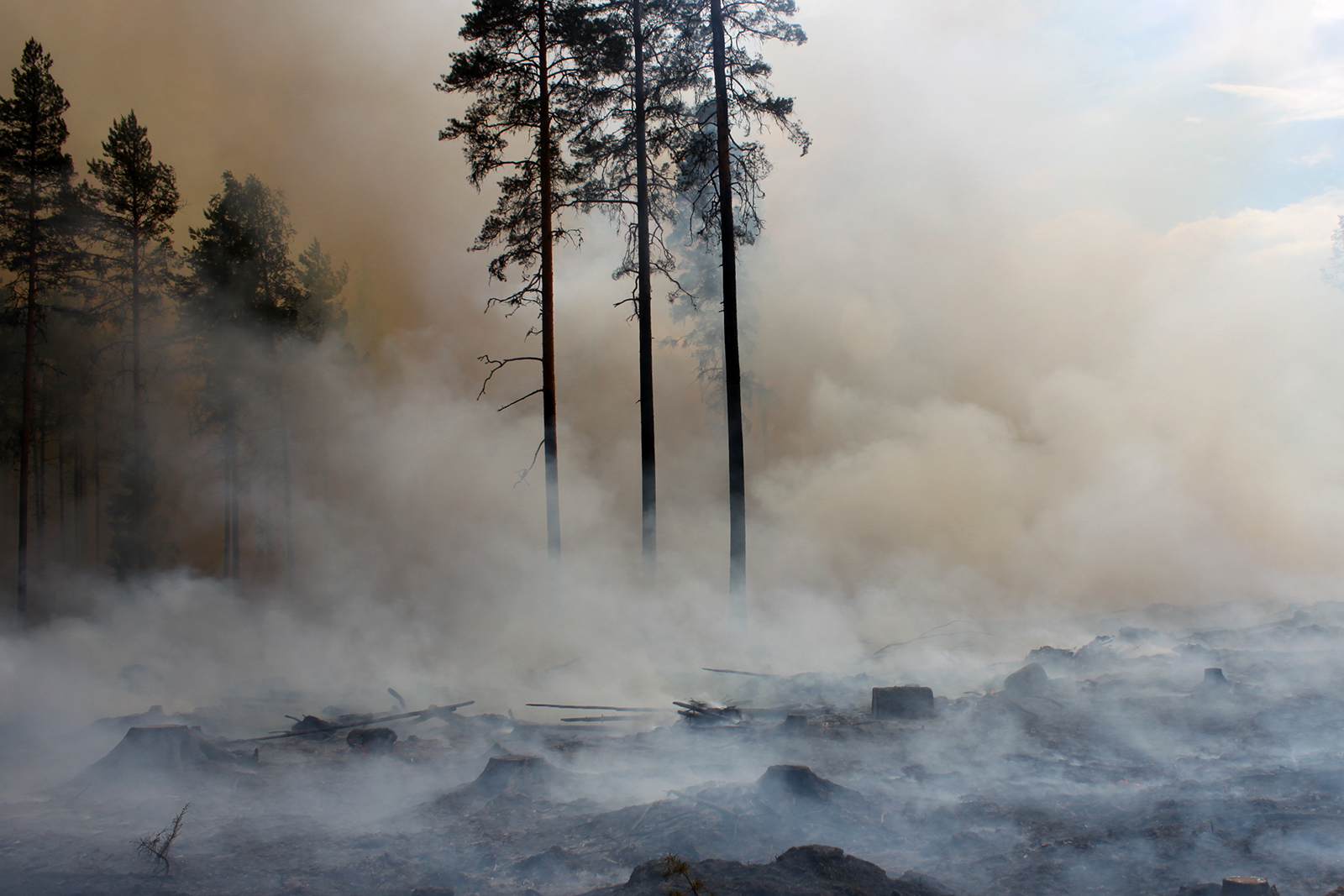 The burned area must be watched until the next decent rain. Pine seeds will be sown later. Photo: Aino Ässämäki

Controlled burning requires special conditions, firefighting equipment and skilled people. Controlled burning is resorted to because in Finland there are only few forest fires and burned wood is important for species specialised in it.

Strong language is heard as men and women run with hoses along a forest road. I am running in the opposite direction towards my car, which is parked by the road. Behind me the flames are licking at the tree trunks. A week later, the person in charge of the pyrotechnics, forest specialist Raimo Kerola of the Forest Management Association of Kanta-Häme, still refuses to admit that his heart beat a little faster while the fire engines approached with their sirens howling.

‘It was a bit too windy and a thunder gust lit a few sparks on the bog. About 15 ares of peatland was burnt. Otherwise the burning went well and the result was good,’ says Kerola on the phone. The thunder gust took the experienced burners by surprise, but the damage was minor.

The fire was under control again before the fire brigade arrived. Present at the operation in the municipality of Loppi were several forest specialists of the Forest Management Association and students of the nearby forestry college of Evo to put out any spot fires. Typically, small fires will start outside the planned area, but this is taken into consideration beforehand and the workers can usually put them out on their own. In this case, my job was to make sure the fire engines had enough room to pass other vehicles on the narrow forest road.

Controlled burning is done for two reasons: to increase biodiversity and to regenerate the forest. The burned area contained a lot of retention trees that were hoped would burn at least partially. This increases biodiversity. A regeneration felling was carried out last winter on most of the area, and after the controlled burning pine seeds will be sown there.

Piia Niskala, the forest owner, felt a little nervous before the operation.

‘I did need to think a bit about whether I would do this,’ she says as the first flames are lit at the edges of the opening. ‘But this is the old way for the forest to regenerate itself, and it is good for biodiversity.’

Niskala is right. ‘Fires have been one way for boreal forests to regenerate for thousands of years,’ says Niina Partanen, Manager of Corporate Responsibility at Stora Enso Metsä. Among other things, Partanen is responsible for forest certification, so she is interested in controlled burning because of the requirements of the certification.

In the 1970’s, one forest fire could destroy hundreds of hectares of forest in Finland. Now forest fires are small, usually only a few hectares in extent. One reason for this is thought to be the dense forest road network. In Loppi, too, the first fire engine arrived in fifteen minutes and could drive almost up to the spot fire.

However, the increasing infrequency of forest fires has led to species depending on burned wood becoming rare. This is why controlled burning is included in the forest certification criteria. The Finnish government subsidizes controlled burning, as long as certain conditions are met. This is why the regeneration area owned by Piia Niskala is not really a clearing, but there are quite a number of retention trees.

Financial support is needed, since controlled burning is expensive and laborious. Firelines must be excavated, and usually a forestry machine is needed to spread the logging residue more evenly across the area to achieve a uniform result. Hoses and pumps are needed. Several people have to be there to light the fire and to watch it.

On top of all that, it is night work. Controlled burning is usually started in the early evening and, depending on the size of the area, people can go home some time in the wee hours, reeking of smoke.

‘I reckon this will cost close on ten thousand euros,’ says Raimo Kerola about this controlled burning area of six hectares.

Controlled burning to improve forest regeneration has a long tradition in Finland, but like wildfires, it is also becoming rare. From the point of view of forest growth, controlled burning improves the balance of nutrients and reduces pests and grasses, which could choke the new seedlings.

‘Not many young people are interested in this. It is a little risky and requires special know-how,’ says Kerola regretfully. ‘In the past thirty years the equipment has improved, but the availability of labour has decreased. Our association used to have permanent forest workers, who were experienced in controlled burning.’

‘It is challenging to find skilled people,’ agrees Partanen from Stora Enso. She does not consider herself an expert in the practical aspects of controlled burning.

Only a few suitable sites

The continuing use of controlled burning depends on the activity of forestry professionals. Both Kerola and Partanen say that controlled burning is actively suggested to forest owners. ‘There are a lot of things to consider here. It is not easy to find suitable sites,’ says Partanen.

Controlled burnings are not carried out in groundwater areas because of the risk of nutrient leach. Power lines or houses may not be too close. It would be good if there was a road and enough water, such as a pond or a capacious ditch, nearby. To qualify for the government subsidies there have to be enough retention trees, at least 15 cubic metres.

A person with sufficient experience must be placed in charge. This is required by the rescue services, who have to be notified. Afterwards the site needs to be watched until the next decent rain.

Kerola is too busy now to go on speaking with me. In Piia Niskala’s forest the work is continued on the other side of the road. The weather is better today than a week ago, because there is little wind. Kerola is not nervous. ‘I am so used to this. It is a relatively still day.’

forest.fi 10.08.2018: Finland has a problem with too few forest fires – to promote biodiversity, burned-down areas should be protected