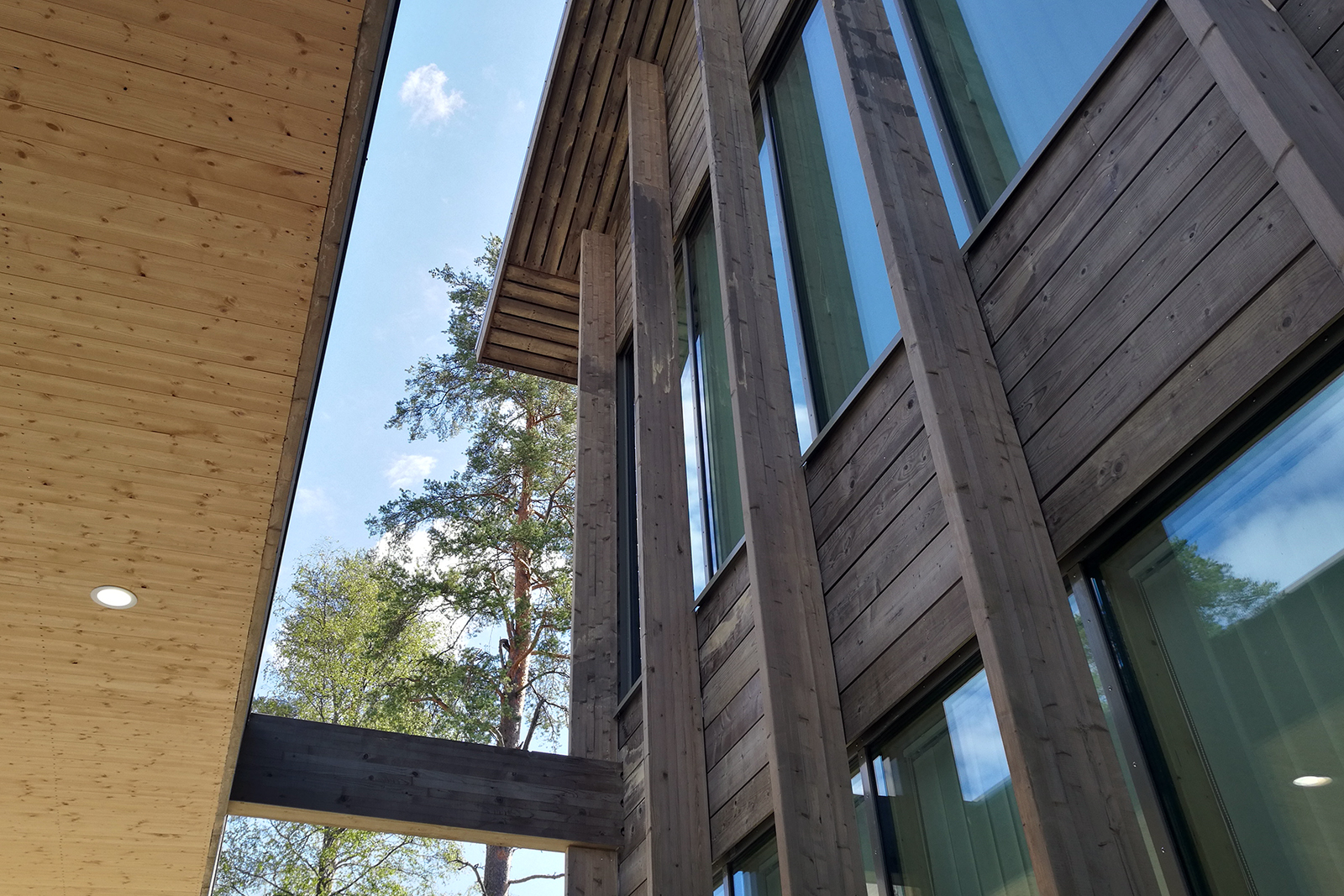 The Mansikkala school has 11,000 square metres in effective use. Only the foundations, the civil defence shelters and the staircases are made of concrete. Photo: Anna Kauppi

An increasing number of schools and daycare centres are built of wood. As well as being an ecological, healthy and beneficial learning environment, they also support the regional economy.

Principal Lasse Tiilikka looks happy as he smiles for the photographer, standing on the Giants’ Steps of his school. Soon, the tiered auditorium dominating the school entrance can also be viewed by the pupils and students.

The Mansikkala school centre in Imatra, Eastern Finland, was completed on time for the new school year starting on Thursday this week. All in all, 1,400 comprehensive school pupils, upper secondary school students and kids attending the daycare centre will return from their summer holidays to brand new facilities.

Tiilikka says that the City of Imatra’s decision to construct a wooden school was viewed as important and positive by many. Both those working in schools and the parents’ associations breathed a sigh of relief. The previous school buildings were plagued by poor indoor quality, and it was known that wood construction would counteract this.

’Research has also shown that wood creates a calming learning environment and even improves learning results,’ Tiilikka says and makes particular mention of the acoustic quality of the facilities. Even in the sizeable sports hall, there is no echo as we walk on the floor.

In the autumn of 2016 the City of Imatra, with a population of just under 30,000, made a decision that attracted attention throughout the country. It decided to close down nine of its schools and arrange schooling in three major school centres. The Mansikkala school, too, was built on the site of a previous school.

The Mansikkala school in Imatra is one in a series of modern wooden school buildings. As many as one in every four schools and daycare centres in Finland are built of wood. The pioneers include the log-built school in Pudasjärvi, completed four yeas ago, and the Tuupala school in Kuhmo, built of CLT and completed one year later.

The Mansikkala school in Imatra has a wooden frame. On the outside, the school is characterized by the dark-stained wooden cladding and the pitched roofs. Throughout the construction, the site was fully protected from the weather. The construction is implemented by the YIT construction company as a life cycle project, which means that the company will be responsible for basic renovation work, for example, so that the value of the building will correspond to a minimum of 80% of its value as new when the contract runs out in 20 years.

Inside, the spaces are bathed in light. There is plenty of glass and pale wood. Much of the fittings are also made of wood, including coat racks and the pupil’s lockers.

The spaces were designed with pedagogy in mind, to support communality and open learning environments. Classrooms are separated by glass walls and may be combined to form larger spaces. The corridors remembered by previous generations are almost completely absent. The pastel-toned sofas in the teachers’ common room can be seen from the lobby through a glass wall.

The Mansikkala school cannot escape the effects of Covid-19. All larger assemblies are suspended until further notice, and only the first- and second-graders have been allowed to visit their new school before the term begins.

forest.fi was given the opportunity to visit the school just before term began, together with Johanna Pulli, Project Manager, and Jouni Silvast, Specialist, both working for a wood construction project run by the Finnish Forest Centre.

’Wood construction has a great significance for regional economies. At best, discussions with local companies are initiated at the stage when needs are mapped, in order for them to take account of substantial projects in their own planning and even in their product development,̈́ says Jouni Silvast.

’We need to ensure that the various actors in the market have an open and continuous dialogue, to avoid unnecessary transport of wood and to ensure that money does circulate,’ says Johanna Pulli.

Silvast says that wood is making a comeback in construction, and especially so in the public sector. Local authorities, too, are in favour of using wood, as was found by Tommi Palokangas in his Master’s thesis. One in every four new schools is made of wood, as are an increasing number of daycare centres and care facilities.

’The public sector plays a central role in the construction market, for the more local authorities opt for wood to build daycare centres, schools and other facilities, the more demand there will also be on the private sector,’ Palokangas points out in his thesis.

In addition to the boost it gives to regional economy, wood construction is favoured by factors related to combating climate change and achieving sustainability. In addition to ecology, decision-making is affected by the positive impact on health and well-being of wood construction. Silvast points out that new research to confirm this will soon be completed, based on experiences from the CLT-built school in Kuhmo, among other things.

The great majority of one-family houses ad leisure houses in Finland are made of wood, but the use of wood in tower blocks and public buildings has only gained ground recently. One factor promoting it have been the new fire safety regulations that allow more opportunities for using wood.

According to a report by the Ministry of Employment and Economic Development, the roughly 30 companies that produce prefabricated elements of wood were mostly founded in the 2010s. In less than five years, the turnover and head count of these companies have doubled.