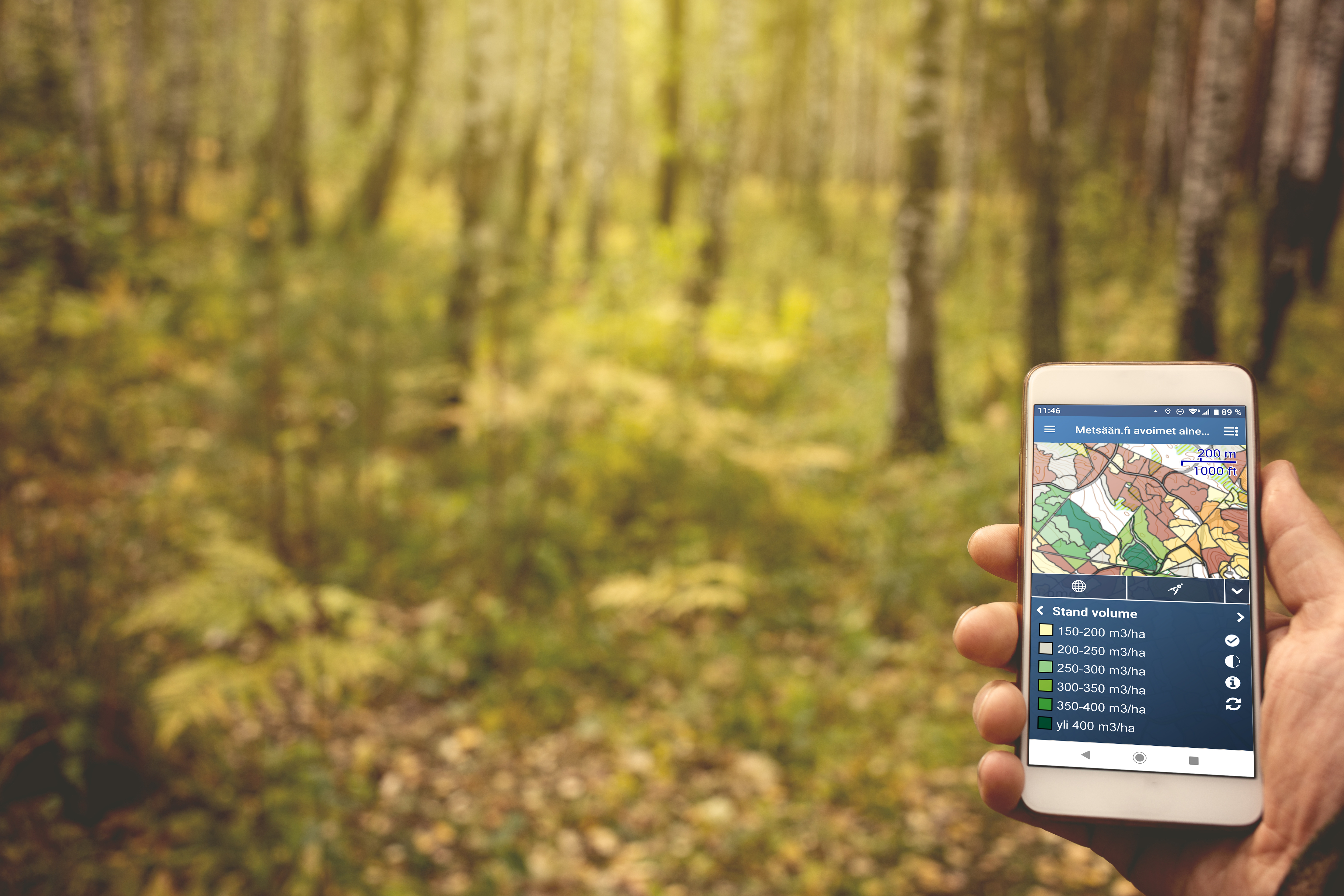 Forestry and forest industry live from each other

The forest sector consists of forestry and forest industry. Forestry refers to forest management and the growing, harvesting and selling of timber.

In addition, there are activities and livelihoods that either serve or are dependent on the forest sector. These include businesses providing services to forest owners, nature tourism and forest research.

The forest sector is one of the important cornerstones of Finnish economy. Natural Resources Institute Finland estimates that in 2017 it employed directly almost 64,000 people. Of the revenue from Finland’s commodities exports in 2017, 20 percent consisted of forest industry products.

In terms of regional economy, the significance of the forest sector is the greatest in South-east Finland, South Savo and Central Finland.

Only branch of production profitable anywhere in Finland under global markets

Since forest industry is part of the exports industry, the forest sector as a whole operates under global market conditions. No other sector of industry in Finland is capable of producing export goods profitably regardless of the location of their facilities in Finland.

In 2019 there were 69 operational pulp, paperboard, paper or paper processing mills in Finland. Data from 2018 shows that there were 81 operational sawmills with an intake of over 10,000 cubic metres of timber a year. The number of smaller sawmills was considerable, about 1,200 according to the latest study on small sawmills covering the years 2008–2010.

The financial yield from family forestry is distributed to hundreds of thousands of forest owners through the length and breadth of the Finnish countryside: of the stumpage revenue from private forests, two thirds remain in the municipality where the forest is located. In addition, the revenue from the timber sold by the state and the forest industry came up to about EUR 318 million.

The forest sector has given rise to many other types of industry and business activity in Finland, such as the manufacturing of paper machines and forestry machinery, and an extremely wide variety of businesses providing planning, design, consulting and expert services. The umbrella term referring to the forest sector and this associated entity is the forest cluster.

Finnish forests are owned by Finns

About 60 percent of productive forest land in Finland (growth categories of forestry land, click here) is owned by private people. There are about 620,000 forest owners in Finland; this figure includes the owners and their spouses, as well as the shareholders of consortia and death estates, with holdings larger than two hectares. This means that almost 14 percent of the population are forest owners.

The share of productive forest land owned by families and individuals is higher than that owned by other groups, because lands owned by the state and partly also those owned by companies are mainly located in less productive areas in north and east Finland. As a result, the share of harvesting of private lands is clearly greater than their share of the ownership, or about 80 percent (for more on forest ownership, click here).

Both chemical and mechanical pulp are intermediate products. Traditionally, they have been converted into paper or cardboard. The wood products industry, in contrast, produces sawn timber, plywood and other wood-based boards, and also processes these further into windows, construction components or furniture.

The raw material of the pulp and paper industry consists of small-diameter timber, which is often called fibrewood. Sawmills use large-dimensioned timber called logs. Logs are sawn into boards and planks, and the by-products from this are sawdust and waney timber, which is used for chips. The chips are used as raw material by the pulp and paper industry, and sawdust is used in manufacturing wood-based boards, for example.

This being so, pulp mills do not compete with sawmills for raw material. On the contrary, the chips from sawmills are an indispensable raw material for pulp production, and the sales of chips are an important source of revenue for sawmills, without which they could not manage. It is said that the average Finnish sawmill can cover its payroll costs by selling chips.

Forest industry in Finland is crucially important for the national economy. Forest industry would not manage without forestry, which produces the raw material.

This is often forgotten by those who consider that more forests should be excluded from commercial use. People can understand that the forest owner wants to receive a compensation for protecting their forests, but at the same time they often forget the risk that this could lead to a loss of jobs in forest industry.

This integration of the forest industry ensures that every tree is utilised completely. The bark, branches, canopies and sometimes even stumps are used: they are converted into energy. Only the roots are left in the forest, and stumps are also rarely harvested these days.

Then again, the use of timber for energy is practically exclusively based on the use of sidestreams. With the exception of domestic use by forest owners, Finnish trees are not felled for energy production purposes. It is only the sidestreams that are burned.

The timber from first thinnings, for example, is so thin that the pulp and paper industry cannot use it. It is normally burned, but this is not why it was felled: the reason is forest management. It would not be profitable to fell these young trees only for energy use, but since they will be felled because of forest management, it makes sense to use them.

It is often said that there are only three large forest companies in Finland. This is not true even in terms of the pulp and paper industry, which does include three substantial companies – Metsä Group, Stora Enso and UPM – but equally, many smaller ones, such as Essity Tissue Finland in Nokia, owned by the Swedish Essity; the South African, international company Sappi in Lohja, and Mondi Powerflute in Kuopio, owned by South African Mondi.

The ‘Big Three’ also operate mechanical forest industry facilities, including plywood factories and sawmills. In addition to them, though, there are several dozen sawmills in Finland, often owned by families: Koskisen, Westas, Versowood and Pölkky are some examples.

The revolution of forest industry is a challenge to the traditional division into branches. Since the global demand of printing paper in particular has gone down, forest industry has had to develop new products in short order. This is nothing new in the history of forest industry: as late as in the 1930s, one of its key exports products were the wooden spools for sewing thread.

To some extent, printing papers have been replaced by packaging board, the demand for which has increased with online shopping. Yet there are also completely new products: Finland was the first country in the world where ordinary motorists could buy wood-based diesel fuel.

Nano and micro fibres are wood fibres ground extremely fine. They have all the good qualities of wood, such as being renewable, biodegradable and lightweight, but additionally many new qualities, such as strength: they can be made into products with the strength of steel, without losing the good qualities of wood. Micro fibres are used to reinforce packaging board, for example.

Compounds of plastic and pulp, called composites, are also important. Being renewable and bio-based, they are often used to replace plastics, especially when the plastic component is also bio-based.

New products are rarely believed to become the kind of bulk product that printing paper is, but one such does exist: wood-based textile fibre. VTT Technical Research Centre of Finland has estimated (more information here) that as early as 2030, almost one million metric tons a year of chemical pulp for textile production could be manufactured by two or three facilities.

According to the estimate, the pulp could be converted into textile fibre by one facility, using a non-toxic technology, and a total of 100–200 tons a year of non-woven textile could be produced by several other facilities. In addition, these new forest-related technologies can be used to recycle all kinds of textile material.

This would enable the replacement of oil-based textile materials and cotton, which requires huge amounts of water to grow and also competes for land with food production.

Roots of forest policy lie in the 19th century

The roots of Finnish forest policy go back to the 19th century, as great concern was expressed over the condition of the forests. Finland’s forest resources were rapidly dwindling due to harvesting methods which focused on the largest trees and to the gathering of firewood. Before that, forests had declined because of slash-and-burn agriculture and the production of pine tar.

In 1859, a forest management institution, the predecessor of today’s Metsähallitus, was established in Finland to bring order to the use of forests. A Forest Act was passed in 1886, prohibiting the destruction of forests and striving to ensure that new stands would be generated after loggings.

An important measure of forest policy was implemented in the 1920s, after Finland had become an independent republic. The tenant farmers of large estates were enabled to buy the fields and forests that they had been managing. This was the birth of the Finnish family forestry.

In the 1990s the Finnish forest policy saw a thorough reform. Sustainable forestry was redefined, and the requirement of ecological and social sustainability was included alongside sustainable timber production. This principle was recorded in all Finnish forest legislation.

The following reform, covering almost all of Finnish forest legislation, took place in the early 2010s. The main goals were to increase the competitivity of forestry and forest industry, to eliminate and revise regulation and to increase competition. Other forest policy goals, such as safeguarding biodiversity, did not change.

Finnish forest policy is being continuously developed by means of participatory planning. The practical implementation of the policy uses many tools, including forest planning.

Regional and national forest planning is realized in extensive collaboration which routinely involves all stakeholders interested in forestry, including bodies outside the forest sector, such as environmental non-governmental organisations (ENGOs).

The Finnish Forest Centre is the regional forest authority, with the task of enforcing the Forest Act. The forest management associations are statutory associations of private forest owners; they also carry on business activity.

State forests are managed by Metsähallitus. The goals of managing state commercial forests are defined by the Ministry of Agriculture and Forestry, and the goals of managing nature reserves by the Ministry for the Environment. The management of state commercial forests is the task of a forestry company fully owned by Metsähallitus, and the management and use of nature reserves is the task of Parks and Wildlife Finland within Metsähallitus.

The use of commercial forests managed by Metsähallitus, including loggings, is determined in regional natural resource plans. Metsähallitus invites all important stakeholders to participate in the planning; these range from ENGOs and NGOs to various groups that use forests. The level of harvesting is not determined by the revenue target set by the Government for Metsähallitus: if the target cannot be met with the harvesting levels specified in the natural resource plans, other means must be used.

A great deal of Finnish forest research, as well as the gathering and maintaining of statistical data on forests, is the responsibility of Natural Resources Institute Finland. Forest research is also carried out in several universities. The state enterprise Tapio produces expert services for bodies active in forestry. Tapio’s Forestry Recommendations are an important means of steering forest management.

Five facts about toilet paper – no, we’ll not run out of it