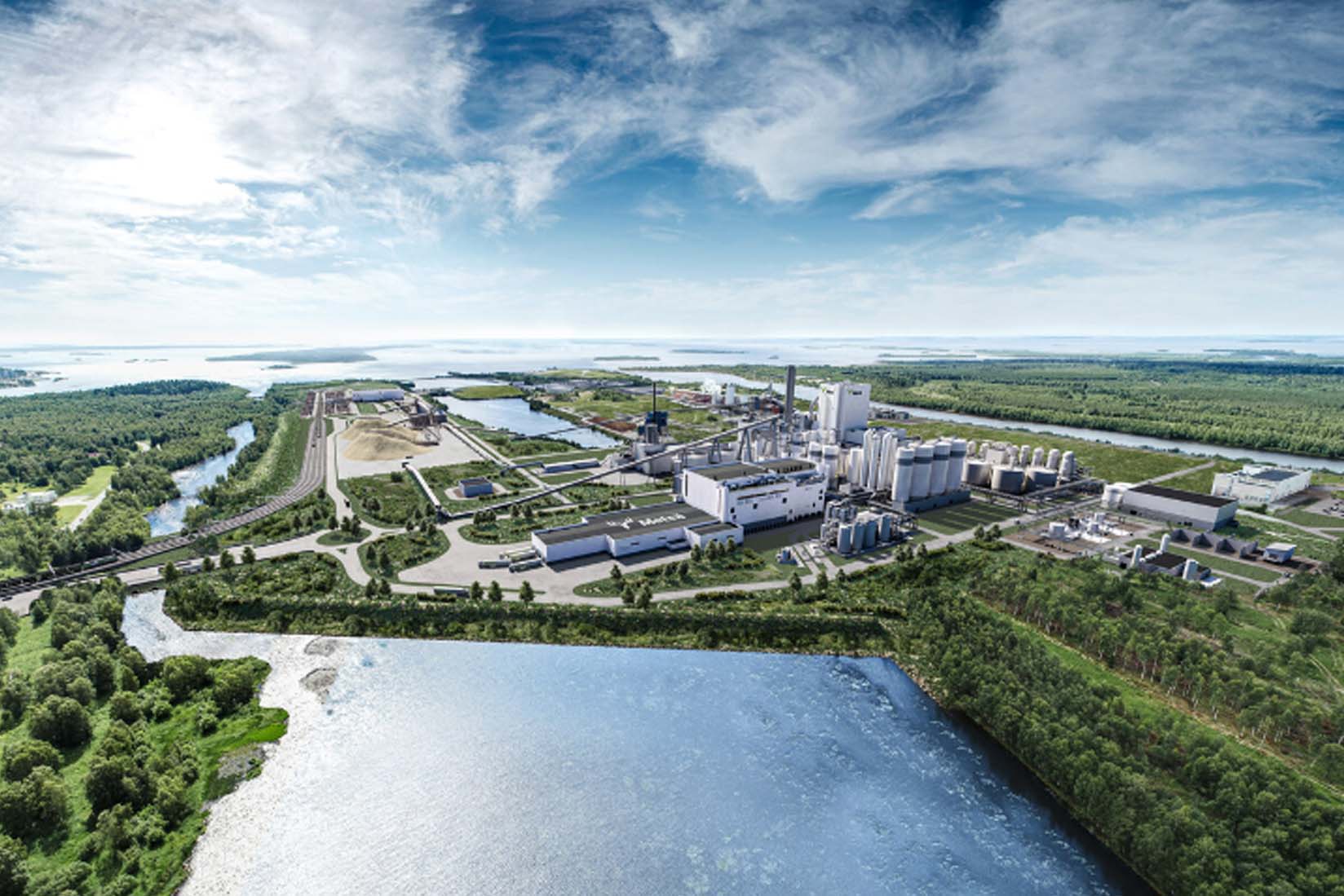 The turnover of the Metsa Group’s new mill in Kemi will be considerably over a thousand million euros per year. Photo: Metsä Group

The largest investment in the history of Finnish forest industry, the Kemi bioproduct mill will be completed in 2023 as per schedule.  In this interview with forest.fi Ilkka Hämälä, President and CEO of Metsä Group, reveals how he would resolve the debate on the use of forests initiated by the EU.

Construction at the new bioproduct mill of Metsä Fibre, part of Metsä Group, is progressing on schedule, in spite of a rise in costs from EUR 1.6 thousand million to EUR 1.95 thousand million, among other things because of the rise in the price of materials. The mill will be started in Q3 2023.

According to Metsä Group’s President and CEO Ilkka Hämälä, the mill’s payback period, including interest and depending on pulp price, is 10 to 15 years.  The mill operation will be ’in the black’ immediately.

Once you get a mill like this up and running, it’s like a baby elk. It will have to stay on its feet as soon as it’s born,’ says Hämälä.

And what will be produced on this 60-hectare plot in the furthest corner of the Gulf of Bothnia? The new Kemi facility will produce annually 3.6 million tonnes of spruce and birch pulp as raw material for paperboard, tissue paper and printing papers, as well as for special products.

The birch pulp will be processed in an integrated paperboard mill adjacent to the bioproduct mill, into coated white-lined kraft liner, in other words, directly into material for transport packagings. The processing of sidestreams in the bioproduct mill will lead to numerous other products, such as renewable energy, generator gas, sulphuric acid, tall oil and turpentine, both for sale and in-house use.

The Kemi bioproduct mill will produce bio-based electricity, a great deal more than a conventional pulp mill. Ilkka Hämälä says the volume of electricity sold will be ’significant’.

’The value of electricity sales will be tens of millions of euros per year. The mill will also generate district heat, which will be sold to the Kemi district heat network,’ he continues.

Some of the tree bark will be gasified into generator gas, to replace fossil fuel oil at the bioproduct mill, while the rest will be sold as fuel to municipal energy plants.

The Kemi bioproduct plant should be less noticeable by its smell than conventional pulp mills are. Sulphuric compounds will be removed from the odorous gases and processed into sulphuric acid, which the mill will use in making tall oil, among other things.

On its completion, the Kemi bioproduct mill will be the most efficient wood-processing facility in the northern hemisphere. Hämälä mentions that the turnover of the new mill will be considerably over a thousand million euros per year.

Hämälä says that the decision to invest in the new facility took into account potential competitors. Its cost competitivity in the envisaged market must be ahead of others.

Obviously, the new mill will do well for the first ten years, it’s just that it should continue doing well for the following thirty years, too. This means that we must do all we can at the investment stage to make sure the efficiency is maintained.

’We must take an efficiency leap. Obviously, the new mill will do well for the first ten years, it’s just that it should continue doing well for the following thirty years, too. This means that we must do all we can at the investment stage to make sure the efficiency is maintained,’ Hämälä says.

The new Kemi mill continues the series of gigantic investments by Metsä Group. In 2015, Metsä Fibre decided to build the Äänekoski bioproduct mill. The mill, costing about EUR 1.2 thousand million, was completed a couple of years later.

Hämälä says the Äänekoski and Kemi mills represent the same generation. The lessons taken from Äänekoski in Central Finland to Kemi in southern Lapland consist, in Hämälä’s words, of ’slight fine-tuning’.

’Compared to the Äänekoski mill, we will reach a slightly higher production volume in Kemi, and with a slightly better energy efficiency. The water consumption figures will be better and automation has been taken a bit further.  As an example, the intake of wood is fully automated in Kemi,’Hämälä says.

’The raw material logistics at Kemi is mainly based on rail transport, while Äänekoski relies on road transport. This is basically due to the geography of wood procurement,’ he continues.

The strategy of Metsä Group is to integrate more industrial processes with the Kemi mill in future years and decades. At Äänekoski, these integrated processes include a pilot mill that produces wood-based textile fibres.

Competitors in softwood market pulp are outside EU

As regards the competition and the capacity of the market for pulp after the Kemi mill starts next year, Hämälä says he can only give guesses. The main competitors in softwood market pulp are in Canada, Chile and Russia, and to some extent in Sweden and Germany.

Hämälä says the volume of the global pulp market is clearly over 60 million tonnes, and it is affected by several varying factors, as regards both production and customers. Sometimes things may change quite rapidly.

’As we started with Äänekoski, we anticipated that the entry of a large new mill could lead to a momentary over-supply of pulp and a drop in prices. As it turned out, various situations came up around the world that led to a strong price rise.’ he notes.

’In calculating profitability, we look at the long-term trend price of pulp beyond cycles and short-term trends, and then calculate the profitability of our project against that.’

According to Hämälä, the rise in pulp prices is due to problems in several areas. Canada, an important producer of softwood market pulp, has experienced difficulties over the last eighteen months. Staring in the early 2000s, the country has been plagued by insect damage, leading to restrictions in timber use, and that is only part of the situation.

Russia has had problems with getting the equipment, machinery and other goods needed in the pulp industry from the Western countries. They’ve had difficulty in bringing normal volumes of products to the market.

’They’ve had bad weather, fires disrupting logistics, and considerable problems with technology at old mills. Disturbances in global logistics chains have caused difficulties in getting products to the market,’ Hämälä says.

The attack mounted by Russia on 24 February can also be seen in the sector.

’Russia has had problems with getting the equipment, machinery and other goods needed in the pulp industry from the Western countries. They’ve had difficulty in bringing normal volumes of products to the market,’ Hämälä says.

At the same time, demand for packaging materials and products for basic hygiene has been good.

’There’s a demand for fibre. That’s what creates balance on the markets,’ Hämälä says.

Competitors not regulated by EU

Ilkka Hämälä points out that their main competitors are outside the European Union and thus outside EU regulation. He considers the political regulation on forests a challenging exercise, due to pressures from several directions.

’Competence in forest policy lies with the member states, not with the Union, but Eu legislation imposes obligations and rules on forest use through numerous legislative projects. There are substantial challenges related to all restrictions and extra expenditure on forestry,’ says Hämälä.

We have the potential to make products that replace fossil economy, but to do that we need a raw material base. This is a debate that we carry on all the time both in Finland  and in Europe.

He points out that at the same time, wood is needed in what is called the green transition.

’The markets need renewable materials and products to move away from the  fossil economy. This is something we ought to succeed in communicating to EU decision-makers. We have the potential to make products that replace fossil economy, but to do that we need a raw material base. This is a debate that we carry on all the time both in Finland  and in Europe,’ Hämälä says.

’I would strive for consensus, a joint agenda to harmonize the different interests.  I would draw up a national plan for the development of forestry, which would take into account climate, biodiversity and all the rest of it,’ Ilkka Hämälä replies.

’The key point would be to look for every means to improve forest growth in Finland and to solve the climate issues that way. We would carry on efficient forestry that would also take account of biodiversity. We would have forests with a broad mix of species and plenty of vitality, and protection measures that could be quite detailed,’ proposes the president and CEO of Metsä Group.