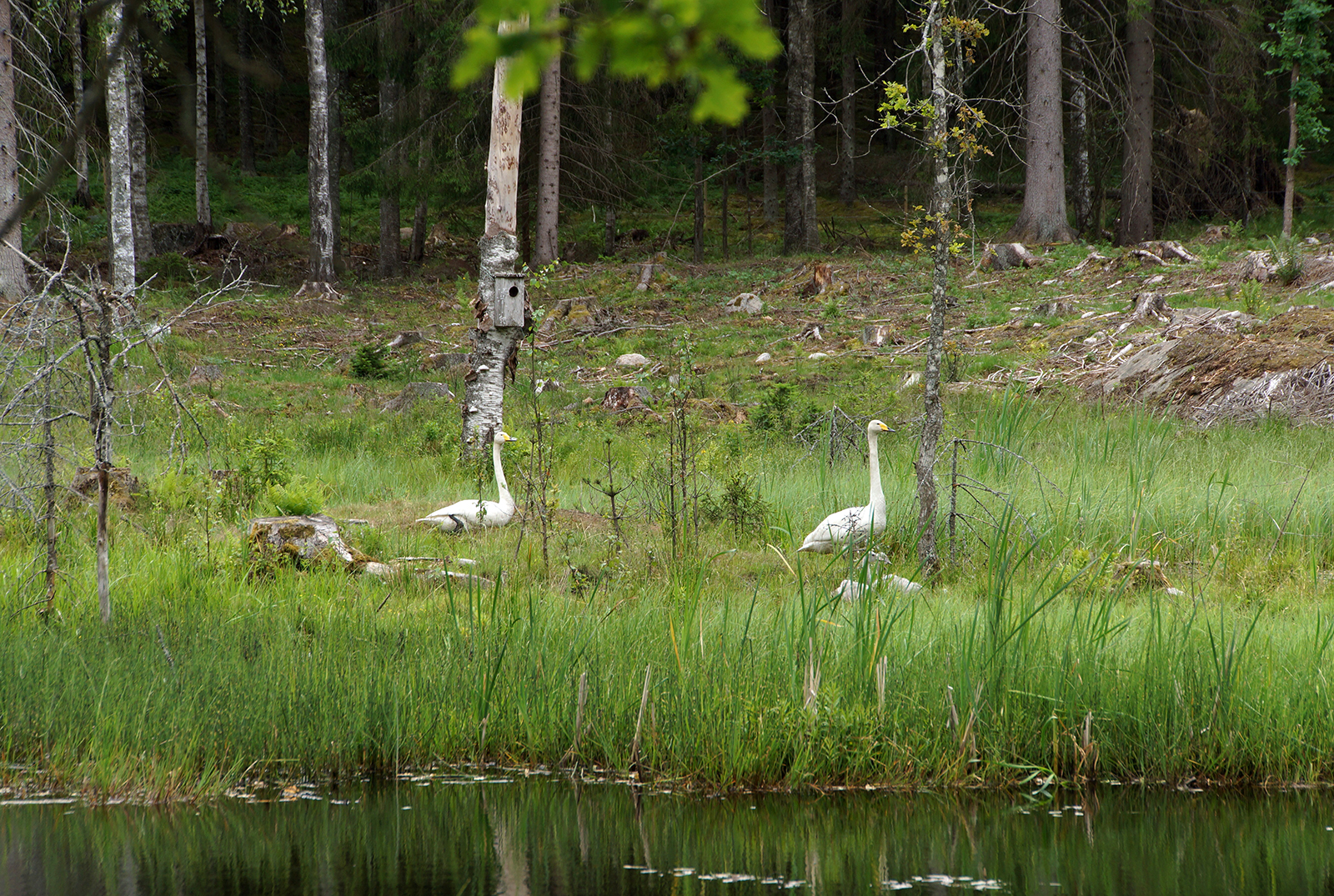 The Koski Manor forests have been used in many ways. When the estate was established along the Kiskonjoki River 340 years ago, water and wood were needed for the furnaces of the manor’s ironworks. Cutting down the forests opened up the vistas from the manor house.

A calm herd of cattle, incuding some calves, graze along the quiet Kiskonjoki River. The river, flowing into the Baltic Sea about a hundred kilometres west of Helsinki, is also called a rare pearl of the South Coast. Nearby, conifers over a hundred years old sough in the wind.

The trees were protected by Fredrik and Helena von Limburg Stirum. When Fredrik von Limburg Stirum took over the estate in 2007, his direction was clear: the management of both the farm and the forest would be as environmentally friendly as possible. Visitors to Koski Manor’s website are welcomed to Finland’s most environmentally friendly farm; this is a reference to an award presented by the World Wildlife Fund.

Forestry has always been an important source of income for the estate. Koski Manor owns one of the largest private forests in Finland. While the average Finnish forest owner has 30.5 hectares of forest, the manor has 1,700 hectares, 100 hectares of which are protected.

Fredrik von Limburg Stirum has actively experimented with different forest regeneration methods, taking account of the characteristics of each forest compartment. For example, strip harvesting is used in some parts of the estate, followed by natural regeneration by seeds from the surrounding forest. Some compartments are suitable for clear felling, but the aim is to move towards continuous-cover forestry where appropriate.

“I am convinced that nature benefits from continuous-cover forestry. However, forest professionals need more skills and knowledge before we can convert completely to continuous-cover cultivation,” says Fredrik von Limburg Stirum.

Sustainable level of felling will increase

More than 4,000 cubic meters are felled every year in the Koski Manor forests. However, the amount will rise to 6,000 cubic meters in the next few years, as the forest area has increased and many compartments are reaching maturity, including stands planted after the war and the former arable fields planted with spruce in the 1960s.

A significant number of the trees harvested on Koski Manor end up in either privately-owned sawmills or the Metsä Group forestry company. Some are sold to local carpenters who build log houses. Timber is also needed for buildings on the estate, in which traditional craftsmanship is used.

“The former schoolhouse on the estate was newly renovated, using logs from trees that had grown slowly for over a hundred years on land with few nutrients, so their annual rings are dense and the wood is solid. I chose them myself in the forest,” von Limburg Stirum reveals.

Wood has also been used for the farm buildings. Even the roof supports of the new, wooden freestall cattle shed are made of wood.

“It was a deliberate choice to use non-metal supports, because less energy is required to manufacture them and the raw material comes from nearby,” says the estate owner.

The energy used to heat the ten residential buildings of the manor and a few utilities buildings comes from burning logging residue of spruce from the estate forests.

Invited to participate in FSC certification

At the beginning of the 2000s, the estate became more broadly conscious of environmental issues. Koski Manor was the first in Finland to join the International Union for Conservation of Nature IUCN Countdown 2010 network, which aimed to safeguard biodiversity by 2010.

“We now know that it did not succeed either globally or in Finland,” says von Limburg Stirum.

The estate converted to organic farming in 2002 and the cattle became organic in 2005. “It was a joint decision with my parents when we knew the estate would pass on to me. It was a very important step from an environmental point of view.”

An environmental leap was taken in the estate’s forestry management when the audit company Det Norske Veritas contacted them and invited them to become a pilot customer for the FSC certification in Finland. In 2013, von Limburg Stirum became the first private forest owner in Finland to receive an individual FSC certification.

“Today we are a member of the Metsä Group’s FSC Group Certification, but the certification process that we initially went through to get our own certification was really educational,” says von Limburg Stirum, adding that the estate forests are also PEFC certified.

The protection sites on the estate have been approved as part of the Forest Biodiversity Programme for Southern Finland – Metso, which enables private forest owners to protect and manage the natural values of their forests on a voluntary basis.

“The Metso programme enabled the most valuable, old and fertile forests on the estate to be protected. Otherwise, it would have been financially impossible to protect them, and we would have protected less fertile sites,” von Limburg Stirum says.

Von Limburg Stirum is particularly pleased to say that the decisions about forest protection were considered very carefully. Acting on expert advice, Koski Manor protected areas of old forests that are as large and unbroken as possible.

According to von Limburg Stirum, an unbroken forest of ten hectares or more already has an impact on biodiversity at a regional level. The smallest protected area on the estate is about one hectare and the largest one 30 hectares in size. About 100 hectares of the manor’s forests are permanently protected.

Even protected forest has value as property

Von Limburg Stirum says it is a big psychological decision to give up the control of your own forest, as is the case, at least to some extent, if you give up the forest for permanent protection.

“It was important to me that the protection sites remain the property of the estate. My condition was that you would be able to hunt in the area and make a fire at designated places, and that we could keep the path through the area open by felling trees, but leaving them in the woods.”

“It was also important to me that wood could be transported through the protection sites from sites where forestry operations would be carried out and that certain areas could be grazed.”

Von Limburg Stirum believes that the forest owner can do a lot to help the environment by his or her own decisions.

“Forestry on our estate would not be sustainable without protection. For example, many different birds of prey nest in our protected forests. The trees are allowed to grow old, which increases diversity. The oldest trees on the protection sites are over 120 years old,” he says.

Von Limburg Stirum believes that old forests are also effective carbon sinks. According to him, more research is needed on what happens, for example, in the soil when the forest is clear-cut.

Thickets for game and wetlands

When von Limburg Stirum, at the age of 15, first saw a magnificent lekking male capercaillie displaying itself during the courting season, it was a memorable experience. Since then, the capercaillie has been his favourite bird.

Learning about grouse and the impact of forestry on their habitats gave him his first incentive for conservation, during his studies of wildlife management in the 1990s.

“It has been sad to see the development of the capercaillie stock, at least on the southern coast of Finland. For example, big courting grounds have disappeared,” von Limburg Stirum says.

Koski Manor was involved in a project aiming to improve the transition zone between open fields and forest so as to make It more attractive to game animals. On the manor lands, the forest does not form a sudden wall next to the open field, but there is a zone of deciduous shrubs with a rich diversity of species.

“The zone can be seen as a financial sacrifice. On the other hand, the forest does not overshadow the field when it stands a little further away. In addition to game birds, elks also enjoy the margin and may perhaps stay out of the field and seedling stands,” von Limburg Stirum ponders.

In 2014, the World Wildlife Fund awarded Koski Manor as the most environmentally friendly farm in Finland. The award justification stated that the dozens of wetland sites built on the estate will reduce nutrient run-off into waterways and promote biodiversity.

“I have the opportunity to have an influence on the environment on my own estate, but the estate operation must also be financially sound. I believe that in the long run, environmental goals and financial benefits can be combined better and better,” says Fredrik von Limburg Stirum, owner of Koski Manor.