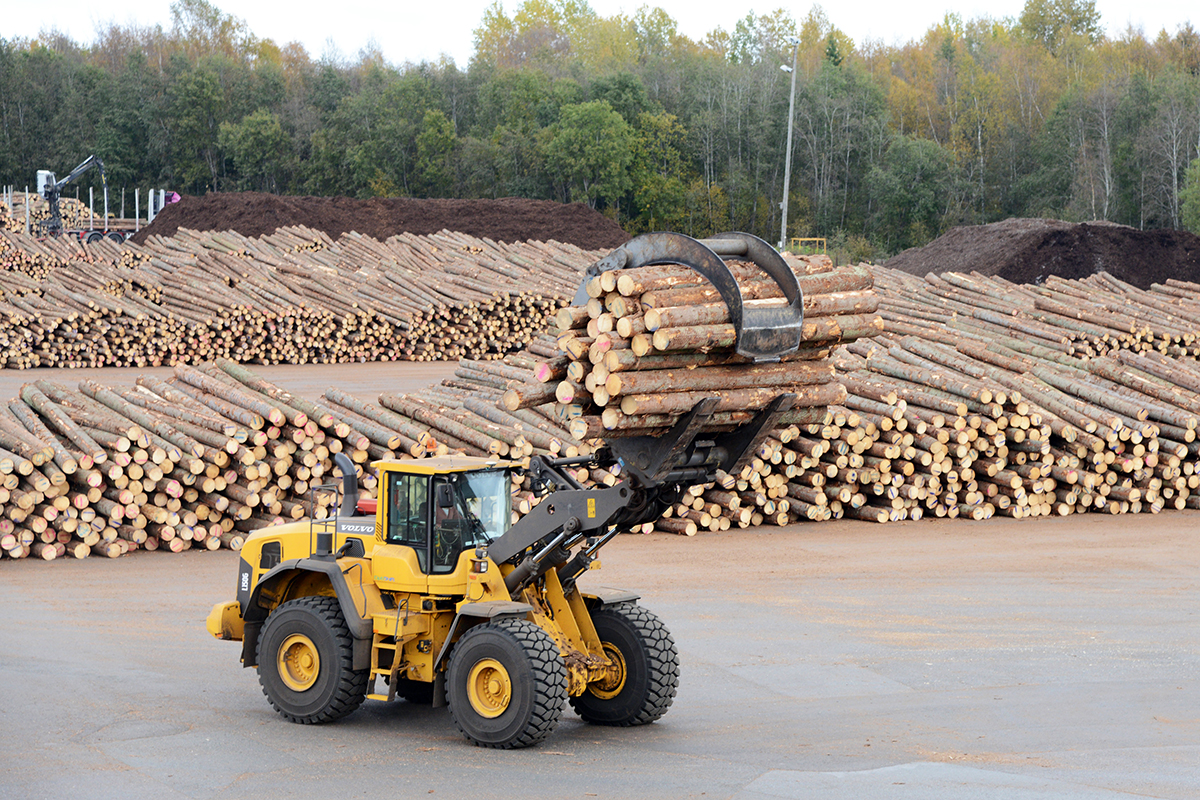 The COVID-19 pandemic increased the demand for sawn timber as well as its prices. Thanks to improved profit margins the Finnish sawmill industry now has potential for investment, not just in improved efficiency, but also in new production and areas like occupational safety.

Forest machines that begin their harvesting work in the morning mark the start of a production chain brought about by the local sawmill and generating work and well-being across the region and the whole country.

Sawn timber was the sixth-largest export product in Finland in 2020. The value of Finnish sawn timber exports came up to EUR 1,6 thousand million, which corresponds to three quarters of the total production of sawmills.

In Finland, the domestic inputs are exceptionally high in the sawmill industry. The report published today by the Finnish Sawmills Association (in Finnish) lists not only timber harvesting, but also the procurement of round timber, long-distance timber transport, sawmill labour force and sawmill technology.

Thanks to the domestic market created by the sawmill industry, important companies exporting sawmill technology have been created in Finland: Veisto, Nordautomation, Valon Kone and Raute are all world leaders in their sector.

Round timber moves thanks to sawmills

‘When it’s noisy at the sawmill, things are as they should,’ reads the caption on the cover of the Sawmill Association’s report. This brings to mind a comparison well known within forest sector: if timber is the raw material that upholds forestry, then the sawmill industry is its heart, causing the raw material to move.

The total purchases of round timber by Finnish sawmills come up to about EUR 1.4 thousand million a year. The logs bought by sawmills make up one third of all timber used in Finland.

Despite buying only a third of the round timber, the sawmill industry pays two thirds of the timber sales revenue of forest owners. This is because sawmills use the most valuable timber grade, that is, logs.

To a great extent, the money paid out by sawmills stays in their vicinity, for the maximum profitable long-distance transport of timber is no more than 100 to 150 kilometres. Most forest owners reside within that area, close to their forests.

Sawmills have many sources of revenue. The principal one is the sale of sawn timber, but the by-products of sawmilling and other activity are also highly significant.

Bark is used to produce energy for the seasoning of sawn timber. Purchasers often have very strict requirements as to the moisture content of timber.

Heat left over from seasoning is led to the district heating network, to heat buildings in the vicinity. Sawdust is compressed into solid biofuel or sold as raw material to the particleboard industry or for pulp production.

The most important by-product are wood chips, left over from the outer parts of logs when round timber is sawn into rectangular lumber. Long-fibred chips made from the outermost parts are sold to pulp mills, who find it an excellent raw material.

High-quality log wood normally comes from regeneration fellings. However, fellings also produce smaller-diameter wood which the sawmill must accept as part of the deal. This small-diameter wood creates an aftermarket of round timber, with the sawmill selling this timber to companies who can use it, such as pulp mills.

In Finland. the number of timber deals annually concluded by the industry and forest owners is about 150,00, but the number of deals in the aftermarket comes up to tens of thousands. The aftermarket deals generate a revenue for the sawmills which is approximately equal to the price they pay to forest owners in timber deals, for the very same trees.

One sawmill employee gives work to three other people

In Finland, sawmills are called independent when they are not part of a larger company, one that manufactures pulp and products made of it. The Finnish Sawmills Association has 29 members, but in addition to these, there are other independent sawmills in Finland, including Anaika, Ersa, Shinshowa and Binderholz.

In all, sawmills in Finland employ 6,000 people, one half of whom work in independent sawmills. Indirectly, every sawmill employee gives work to an average of three people elsewhere along the value chain, such as in timber harvesting and transport, forest services and maintenance. This means that across the value chain sawmills provide work to 24,000 people

Sawmill employees are not of the wandering kind: on average, employment relationships last 14.5 years. The share of women employees is 12.3 percent, though this is increasing with the work becoming less physical, thanks to new technology for instance.

Public provision of education for sawmill work is almost non-existent

Compared to many other branches, the Finnish sawmill industry bears a greater responsibility for the education and training of its employees. Despite the crucial importance of the branch for the entire forest sector and thus for all of the Finnish national economy, government-funded education and training in the field has been almost completely discontinued, and there are no promises of future improvement.

As an example, bachelor-level education in wood technology is now provided by one school instead of six, as it used to be. This means that the sawmill industry has found it necessary to sort out its recruitment problems on its own.

In practice, professionals with a degree from an applied sciences university or other university are only captured by sawmills if a young person studying some other appropriate field gets a summer job at a sawmill and then decides to come back after graduation.

In some localities, the role of the sawmill industry in the regional economy has been enhanced by projects led by the local authority. In the municipality of Kuhmo in Eastern Finland, for example, one employee of the local sawmill generates work in the value chain for not just the average three, but for five people. This is the result of systematically developing the further processing within the value chain of the sawn timber produced by the Kuhmo Oy sawmill.

Thanks to the project, the businesses in Kuhmo include the Crosslam factory, producing cross-laminated timber (CLT), and Elementti-Sampo, which processes CLT further into prefabricated elements for high-rise buildings and is the largest in its field in Finland.

Kuhmo also has a local reference of wood construction: the Tuupala school. The construction project showed that every euro invested by the local authority in the project generated as many as three euros in the regional economy.

At the moment, the situation of the Finnish sawmill industry is encouraging. The COVID-19 pandemic increased demand and prices and improved profitability. Many companies have consequently announced that they will invest not just in improving production efficiency, but also in new production.

Keitele has invested a great deal in recent years, and investments have now been announced by Koskisen, Pölkky, Junnikkala, Kuhmo, Versowood, Veljekset Vaara and Hasa. In addition to the independent sawmills, Metsä Group will also soon take into operation a sizeable sawmill in Rauma, Western Finland. According to the Metsälehti magazine (linkki, jos löytyy), other companies planning investments include Binderholz, Orasko, Vuokila Wood and Tervolan saha ja höyläämö.

The sum total of the investments announced by independent sawmills is EUR 250 million. However, Metsälehti has calculated that the total sum of investments planned by the sawmill industry comes up to EUR 300 million.

Contracts for equipment have chiefly been concluded with domestic suppliers. The current trends favouring wood construction brings more certainty to the development work.

Finland could well afford an increase in wood construction. According to a report commissioned by the wood product industry from Granlund consulting (linkki), only six percent of the production of the sawmill, plywood and wood board industry would be needed to double the volume of wood construction in Finland from its current level.