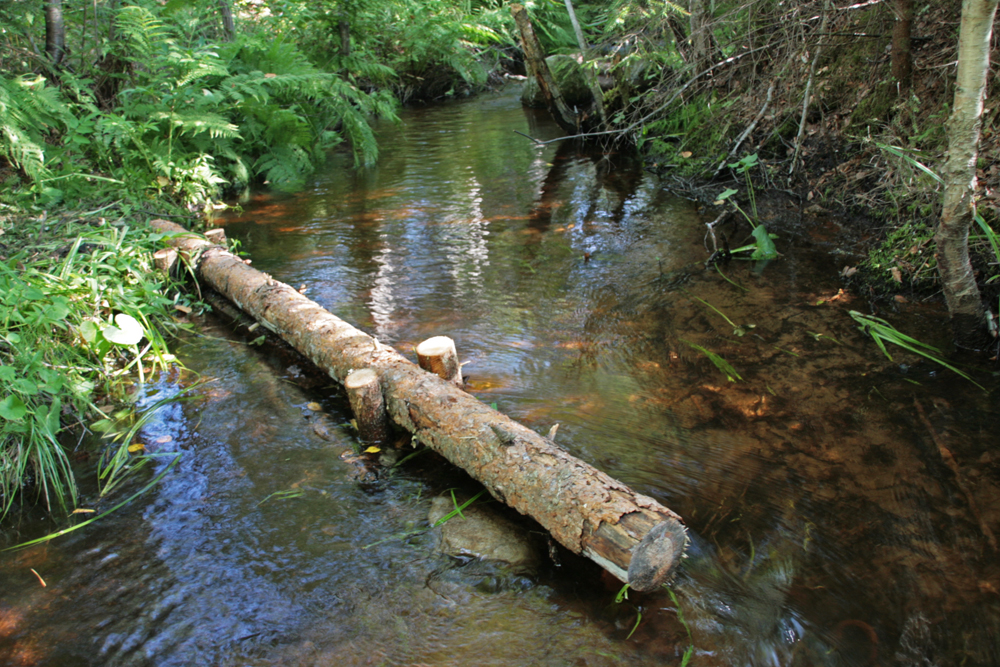 Amount of deadwood in commercial forests can be increased on, for example, valuable habitats that are protected by the Forest Act. Photo: Anna Kauppi

Because state funding for biodiversity work in Finnish forests is decreasing, the Government encourages the forest sector to increase its efforts in nature protection. The forest industry responds to this by initiating a forest environment programme.

The decision to draft this programme is based on concerns caused by the increase in the use of forests. Although the sustainability of timber production is not at risk, there is widely-held concern about forest biodiversity.

The annual volume of stemwood harvested for industrial use in Finland has lately been around 55 million cubic metres. In addition to this, some four million cubic metres of energy wood – logging residue and wood from the maintenance of young stands – have been gathered annually from Finnish forests.

For stemwood, the Government aims to bring the annual harvesting volume up to 70 million cubic metres, and for energy wood to eight million. After the completion of industry investments under construction or at the planning stage, the demand for stemwood could increase by ten million cubic metres annually.

These figures are still far below the highest sustainable level of stemwood harvesting, which is 85 million cubic metres. Consequently, the annual carbon sink of forests, which has remained high for decades, is deemed to be safe.

The question of forest biodiversity is more complex, as there are no unambiguous or commonly accepted indicators for the sufficient level of biodiversity. At this point, the debate on this is only based on opinions, and within the forest sector the common opinion is that forestry and biodiversity can be harmonized, though this will require dedicated measures.

The forest environment programme planned by the Finnish forest industry is, in fact, one such measure.

The programme will entail a great deal of research. This will be carried out by two independent, state-owned institutes: the Natural Resources Institute Finland and the Finnish Environment Institute.

The research plans are to be finalised during 2016 and implemented in 2017–2020. The goal is to identify deficiencies in present forestry operations with regard to biodiversity and to improve the operations on the basis of research findings.

The research focuses on nature characteristics important for biodiversity – such as decayed wood, deciduous trees and large and old trees – key biotopes, especially herb-rich forests, and species that serve as indicators of sustainability.

One useful operation model is already familiar: increasing the amount of deadwood in commercial forests. The lack of deadwood is crucial for as many as one third of endangered forest species.

Regarding deadwood, much has already been achieved by forest certification: it requires that retention trees are left standing in connection with regeneration fellings and, according to researchers, this is the most important reason behind the positive turn taken by the development of the endangeredness of forest species.

The operating model for deadwood will be published in the beginning of 2017. In addition to researchers, the organisations of family forest owners as well as WWF Finland are involved in the work.

An operating model for developing forestry activities on peatlands will also need to be drafted. Peatlands are important because extensive tracts of them will be maturing for regeneration during the years to come.

Special emphasis will be placed on the effects of forestry on waterways and on ecosystem services in general and, again, on how to find the best balance between using the forests and protecting nature values.

In addition to this, a model will be created for the promotion of forest protection in connection with timber trade. The idea is to grant the forest owners a tax rebate in return for protecting part of their forests.

The model would act as an incentive to both timber trade and forest protection. It will, however, require the approval of the tax authority before being implemented.