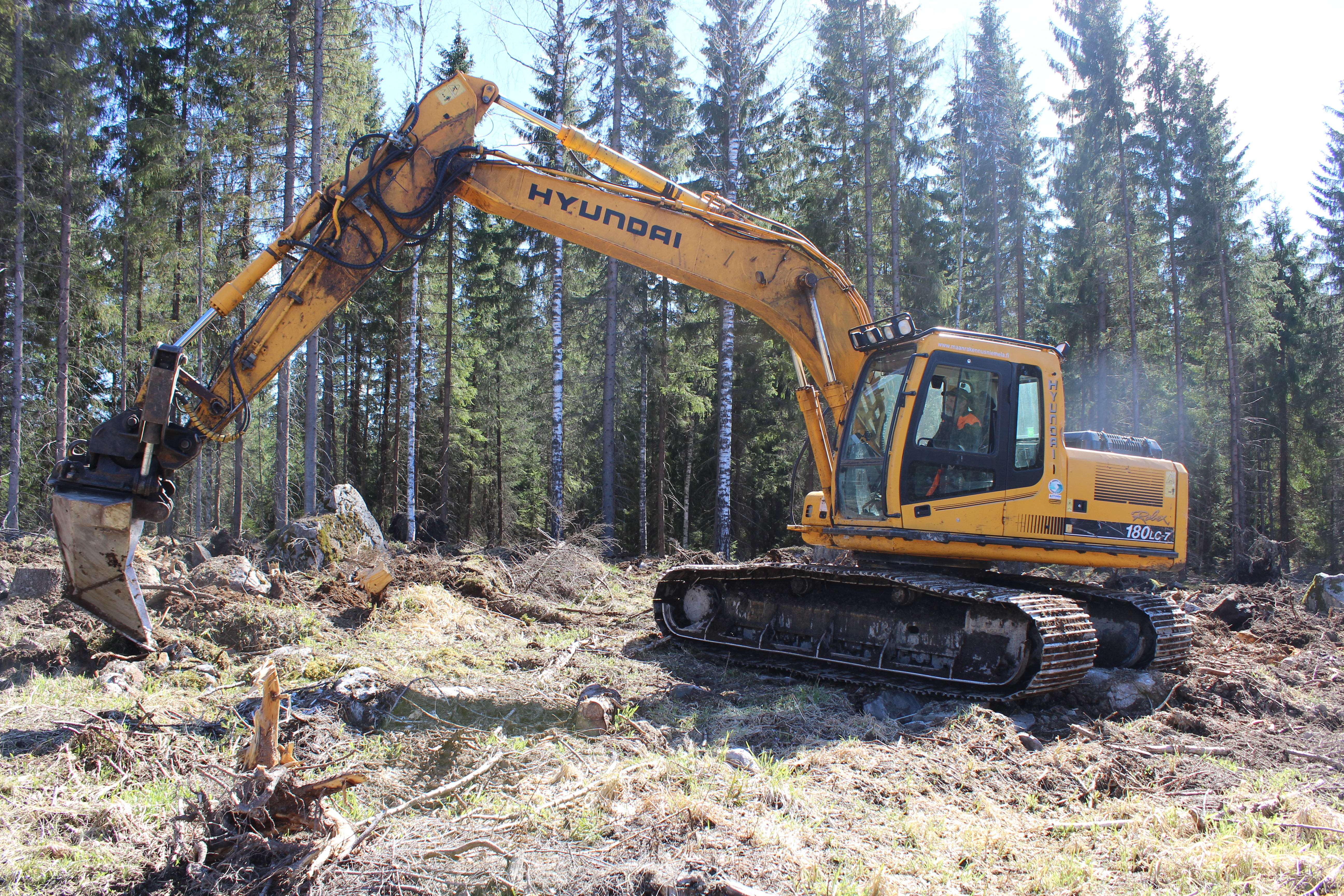 You might imagine that, after years of practice, Finns are dab hands at making their forest grow. In reality, however, significant inventions have been made in forestry even quite recently.

Many improvements have become possible owing to the overall development in technology. One of the latest examples is the method of planting trees by patch mounding, developed in the 1990s.

Until then, the initial growth of a seedling was assured by clearing a patch free of humus around it. This had the disadvantage that the seedling ended up at the bottom of a depression which collected water and as a growing site shady, poor of nutrients, tight and cold.

In patch mounding a digger scoops up a chunk of the surface soil down to the mineral soil, and the chunk is turned upside down and dropped next to the patch just cleared. The seedling is then planted in the mineral soil on top of the mound.

This creates a sunny, warm and dry place for the seedling to grow, free from any undergrowth. At the same time, an airtight “pocket” is created under the mineral soil covering the mound, and the humus in the pocket starts to compost.

Thanks to this process, the seedling has better access to nitrogen, a nutrient normally scarce in Finnish forests. This significantly accelerates the growth of the seedling during the 2–3 first years, after which it does not normally need the nutrients from the pocket, as its roots now extend to a larger area.

The increase in growth is substantial, especially during the critical first stage of the seedling’s life. “Compared to conventional patching or harrowing the increase in height may be even 50 percent, which is crucial with regard to the competition faced by the seedling during the first few years of its lifetime,” says Mr. Juho Rantala, forestry services manager at the Metsä Group company.

“In addition to this, patch mounding makes it more difficult for the large pine weevil (Hylobius abietis) to attack the seedling. Access to water is also safeguarded, when water comes up from the bottom soil thanks to capillary action and stays in the chunk even during dry season. On the other hand, as the seedling grows on top of the mound, it will not be flooded,” says Rantala.

The basic method of patch mounding has been improved by Metsä Group, and in a very simple way. “In patch mounding the chunk is set next to the cleared patch, but in turn-mounding it is set back where it was first scooped up,” says Rantala.

Rantala says that turn-mounding usually is about equal to patch mounding in terms of accelerating seedling growth, but it decreases the growth of underbrush and leaves the terrain more even, since it does away with the depressions hampering tending of seedling stand, for example, which are created otherwise. This decreases the costs of tending of seedling stand and does not change the landscape as much as patc mounding.

On the other hand, the amount of humus left in the pocket in turn-mounding is basically only half of that in patch mounding. Rantala still thinks that this is quite enough for the seedling during its first 2–3 years.

Watch a video of mechanized tree planting (unfortunately only in Finnish)

New methods of remote sensing and forestry planning were taken into use in the 2000s. They have significantly increased the profitability of forestry. An essential tool in this is the Motti software, which enables a simulation of the effects of different forestry activities on the forest to be grown.

The software provides access to information collected during several centuries on the reactions of forests and trees to human activity and natural changes in the environment. Motti provides answers to all manner of “What if…?” questions.

Forestry planning nowadays totally leans on IT technology. Due to this, the plans are updated constantly and forestry activities can be carried out just in time. Previously the plans were made for five years’ time period, which could lead to situation, where tending of seedling stands, for example, was carried out four years too late.

Boron fertilizing was taken into use in the 2000s. It solved a problem that had baffled those researching forest damage since the 1960s: what is the factor hindering the growth of spruce in Central and Eastern Finland on lands where slash-and-burn agriculture was used in the 1800s? It was discovered that lack of boron may actually stop the growth of spruce completely on these lands.

It was previously assumed that the low growth rates were due to damage caused by fungi or insects, or pollution. However, even a few kilograms of boron per hectare are enough to increase growth. The effect can already be seen during the same growing season, and it will persist over the whole rotation period. After four growing seasons, the tree will be 20 percent stouter and some six percent taller than without fertilizing (read more here).

Forest certification has made forestry activities more systematic. At its best, it ensures the implementation of all other forestry guidelines as well, although it has not decreased the massive backlog of necessary forest management operations in Finnish forests.

Nature management in commercial forests was started in Finland in the 1990s. Previously, forest biodiversity was mainly safeguarded by excluding from commercial use the maximum number of forest hectares possible, even if they sometimes did not include any significant nature values.

Nature management in commercial forests brought the principle of cost-efficiency to the safeguarding of forest biodiversity. The principle aims at targeting the protection precisely to the valuable habitats. The nature values to be protected are defined in many documents, such as the forest biodiversity action plan Metso, the Forest Act, the official guidelines for forestry activities and forest certification criteria.

The mechanization of thinnings in addition to final fellings resulted in one of the largest productivity leaps achieved during the 1980s. This leap is still continuing in, for example, the mechanized sowing in connection with soil preparation, which is possible for certain forest types in certain areas of Finland. And, at the moment, the mechanized uprooting of saplings is about to make a breakthrough (see a video of a harvester in action).

The self-monitoring of forest regeneration means that the condition of the regeneration sites will be evaluated 3–5 years after the work, depending on the method of regeneration. In this way, those who plan and carry out the work will be informed about the success of their work and, above all, why it may have failed.

The Finnish Forest Research Institute began testing the method in the early 2000s. Since then, it has been taken into much more extensive use.

Lump seedlings also make it possible to lengthen the planting season from spring to summer and autumn. Due to this the use of labour force may be much more stable.

The relascope was introduced in the 1960s. Before this, thinnings were planned without accurate knowledge of how many trees to leave standing in the forest.

The relascope allowed the exact determination of the basal area, or the total area of the cross-sections of all the trees in a forest, measured near the ground level. This made it possible to create and use thinning models based on the basal area concept.

This, in turn, resulted in increasingly dense forests containing the maximum possible amount of timber, which is one of the main reasons behind the significant increase in growth of the Finnish forests.

Professor Kari Mielikäinen and Research Scientist Heikki Smolander from the Natural Resources Institute Finland were also interviewed for the article.