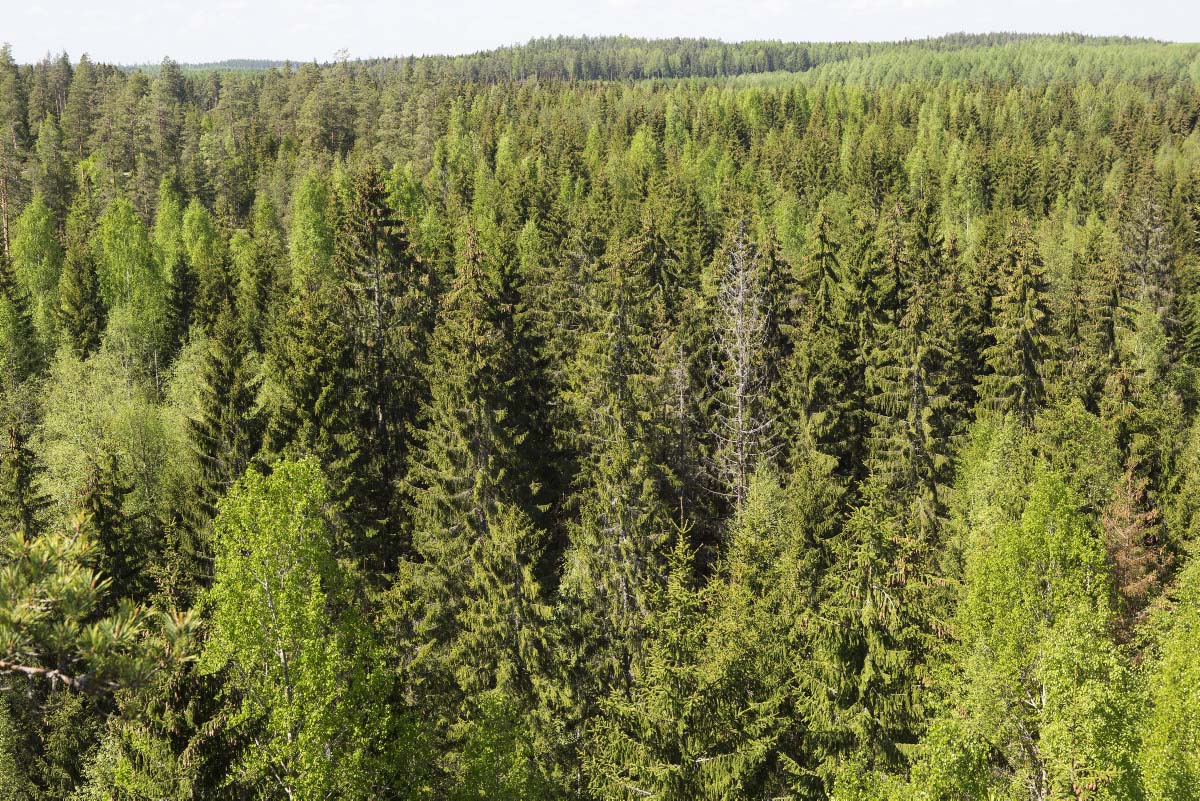 Even in a gene reserve forest, it is not possible to avoid the influx of new genetic material, because of the spreading of pollen from nearby forests. Photo: Erkki Oksanen, Luke

The purpose of gene reserve forests is to conserve the genetic variability of tree species, which is an important aspect of biodiversity, on a par with ecosystems and the range of different species.

Gene reserve forests ensure that tree species will adapt to environmental and climatic changes. According to researchers, the conservation of forest genetic resources can be supported by thinning and felling.

The most recent forestry operation in a gene reserve forest took place in Lapinjärvi, Southern Finland. The Finnish Association for Nature Conservation, the Finnish Nature League and WWF Finland protested against the felling of the spruce stand in February. The organizations considered that spruce would also regenerate naturally in the valuable nature area.

“A gene reserve forest could be called a gene bank in which nature saves the genes it regards as the most valuable at a given time,” says Ms. Mari Rusanen, senior researcher at the Natural Resources Institute Finland.

The Natural Resources Institute is responsible for the management of Finland’s 44 gene reserve forests, which cover an area of 7,200 hectares.

In gene reserve forests, seeds and seedlings can only be of natural origin. This will ensure that the genetic resources are natural and retain their local character: characteristics of other forests cannot slip in with the growth of a new tree generation.

Gene reserve forests differ from conservation areas in that forestry is allowed in them. This makes it possible to create space for new seedlings, which stimulates natural regeneration and genetic variability.

“The genetic composition changes each time that new seedlings start growing and mature trees are removed. Big old trees originally adapted to the climate of eighty or a hundred years ago,” says Rusanen.

“When a stand is able to regenerate, it gets healthier and more resistant to insects, for example, or to changes caused by the climate change,” says Rusanen.

On both state- and company-owned land

It is very important to ensure that a gene reserve forest has always been regenerated naturally, or at least, that only seeds from that particular area have been used in regeneration. Most gene reserve forests are located in state-owned forests, where records are kept of all forestry operations.

Gene reserve forest are also owned by forestry companies, such as Tornator, one of the largest forest owners in Finland. On Tornator land, the genetic variability of not only pine and spruce, but also ash and linden is protected.

“Genetic conservation is very important. It allows us to anticipate future challenges, such as those brought by the climate change,” says Ms. Maarit Sallinen, Forestry and Environment Manager at Tornator.

“In gene reserve forests, forestry operations are possible as long as instructions from the Natural Resources Institute are observed. For example, the seed material used for regeneration has to be collected locally,” says Sallinen, who is pleased with the guidance given by the Natural Resources Institute on forestry operations.

Rusanen says that you only need to look at in Central Europe to see how original tree species and their local variations may be mixed and all data on origins lost. Unlike Finland, many countries have carried on seed trade without paying attention to the origin of seeds and their suitability to new environments.

In 2015 and for the first time, Finnish spruce and pine seeds were deposited long term in the Global Seed Vault in Svalbard. The gene bank preserves seeds from all over the world. The seed storage is opened by the Norwegian Government in February 2008. Responsible for the operation and management is The Nordic Genetic Resource Center.

Seeds in the gene bank are protected by permafrost and they form a sort of backup copy of forest trees. For researchers, the seed storage enables a long-term study of genetic variability.

“It’s an interesting idea that even after 200 years, my colleagues could examine seeds deposited today,” says Rusanen. She says that if she herself could get her hands on genetic material that old, she would want to research the climate change.

In Finland, the Natural Resources Institute is responsible for the conservation of genetic variability. Guidelines for the genetic conservation of forest trees in Finland are given in the National Plant Genetic Resources Programme.

The conservation of biological diversity is also the main goal of the UN Convention on Biological Diversity, opened for signature at the Earth Summit in Rio de Janeiro in 1992.

In Europe, the management and conservation of genetic resources is coordinated by the EUFORGEN programme.

The Nordic countries co-operate on the conservation of genetic resources under the direction of NordGen – the Nordic Genetic Resource Center.