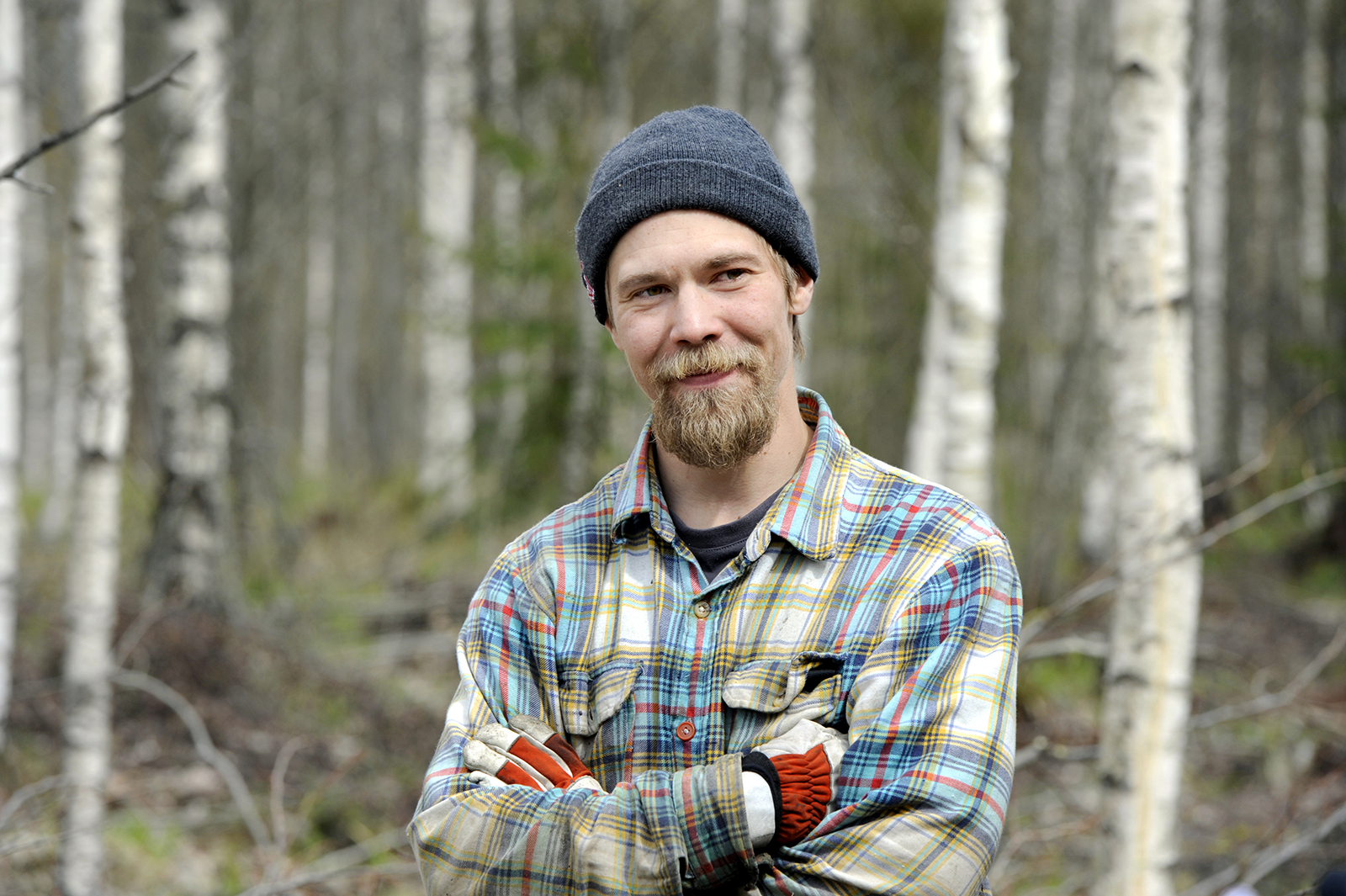 Roope Tonteri, snowboarding world champion in slopestyle and big air, says he aspires to be a forestry worker. Looking after forests is a badge of honour for him. It also strengthens his bond with nature.

Our routemap is clear: first use the navigator to find a grey Volkswagen at the end of a forestry road, and ’then just follow the noise’. On arrival we can see that the right direction is marked for us by an arrow made of split aspen that gleam whitely at us.

What could be easier, except that it is not. Both on the harvester track and especially beside it, the thickets are simply impossible to penetrate. This is one of the forest properties that Tonteri has purchased.

Yet if you ask Tonteri what he considers his greatest achievement, the somewhat surprising reply is, ’The gold in the 2011 Burton European Open competition.’

Those were the times before snowboarding was ’officially’ accepted and the world’s biggest competition was organised by the manufacturer Burton Snowboards. Tonteri says that official recognition turned snowboarding into sports, which he does not think was a totally good thing.

’I don’t consider myself an athlete; I’m a snowboarder,’ Tonteri says.

’You don’t get to participate in the Olympics unless you are part of Team Finland, and if you are that, you also have obligations. At times I’ve felt that it hasn’t got much to do with the freedom of snowboarding,’ Tonteri notes.

At 28, Tonteri has not given up snowboarding, though he is not necessarily interested in competing. ’I may or may not compete next year,’ he says.

Taking part in competitions is not a requirement if you want to make money with snowboarding. ’Traditional sports are of no interest to anyone unless they are competitive. But snowboarders can earn money by making videos or magazine covers, for example, even without competing,’ Tonteri explains.

Still, the realm of freedom is not accessible for ever and the showy runs ultimately become less so. You have got to look for something else.

Tonteri has found that something in the forest. And, after all, snowboarding is not that far removed from a forest occupation of bygone times: log driving, that is, floating timber downriver to the mill. Timber rafting competitions for log drivers are still held in Finland every summer, and the events involve usually coming down a stretch of rapids standing on a single log, with only a long pole to keep the balance and as fast as possible.

So we should not be surprised to hear that Tonteri has, in fact, participated in these competitions. ’It must have been something like 15 years ago when log driver marathons were held for young people in Kuusamo and Ii. And I’ve still got a log for that at my summer cottage,’ Tonteri says.

Forestry is something that Tonteri likes because in his own forest he can do just what he wants. ’Or not do. Like yesterday on my coffee break, I had a chat with a hare, and when it was time to continue, I told him he should make tracks now before I turn my chain saw on, and he just lolloped away across the road,’ Tonteri recounts.

Thickets do not grow logs

Tonteri feels that forests must be tended. The need for that can also be seen where we now find ourselves. It takes a very long time for the spruces to achieve log dimensions unless the stand is thinned. That can be done by people, but of course the work can also be left to storms, wildfires, pests or all three together.

’Some years ago I was driving through Germany and stopped to look at some of the spruce stands I was passing. Right next to the road the trees were great, but when I went into the forest, it was just one big tangle, full of skinny trees like beanpoles and not a single one of decent size. Those won’t grow into logs,’ Tonteri declares.

We now know that Tonteri is a forest owner, but he is also studying for a vocational qualification in forestry at the Kouvola Region Vocational College. ’A lumberjack, that’s what I’ll be eventually,’ he says.

At the standard pace the studies will take three years, but reality may look a bit different. Especially now, during the Covid-19 pandemic, Tonteri also needs to attend his own private college, the few dozen hectares of forest he has purchased over the past couple of years.

’I haven’t inherited any of it. All the surplus I’ve had since 2014, I’ve invested in forest and machinery. The first plot was bought a couple of years ago,’ Tonteri says.

Being a forest owner and tending his own forest is just one of Tonteri’s plans. ’I’ve also thought about working as machine operator,’ he reveals.

He is, however, not referring to big harvesters, which would be a gigantic investment and a great deal of responsibility. ’There’d be much more interest and variation in operating an agricultural tractor with forestry attachments,’ Tonteri thinks.

One of those is actually standing next to the site: a Finnish Valtra manufactured at Acgo Group factory in Finland, coupled to a Kesla trailer and loader.

Tonteri’s plans for a career change have been a source of wonder to those who knew him before. ’Over in California they don’t really understand how a person might want to be felling trees in his own forest. And yet every single snowboard they use is partly made of wood. People want to use wood, but they don’t want trees to be felled,’ Tonteri says.

’They ask me whether I have any kind of bond with nature. Of course I have. I reckon that after my next regeneration felling I’ll be sitting on top of my timber pile and think like, that’s that done, and now to plant a new forest,’ Tonteri says.

’The way it is, both that bunny and I need forests, but I also need money. If I’m planning to carry out felling on a total of 7.5 hectares this year and one of them will be clear-cut, then I think we’ll both do well,’ Tonteri concludes.