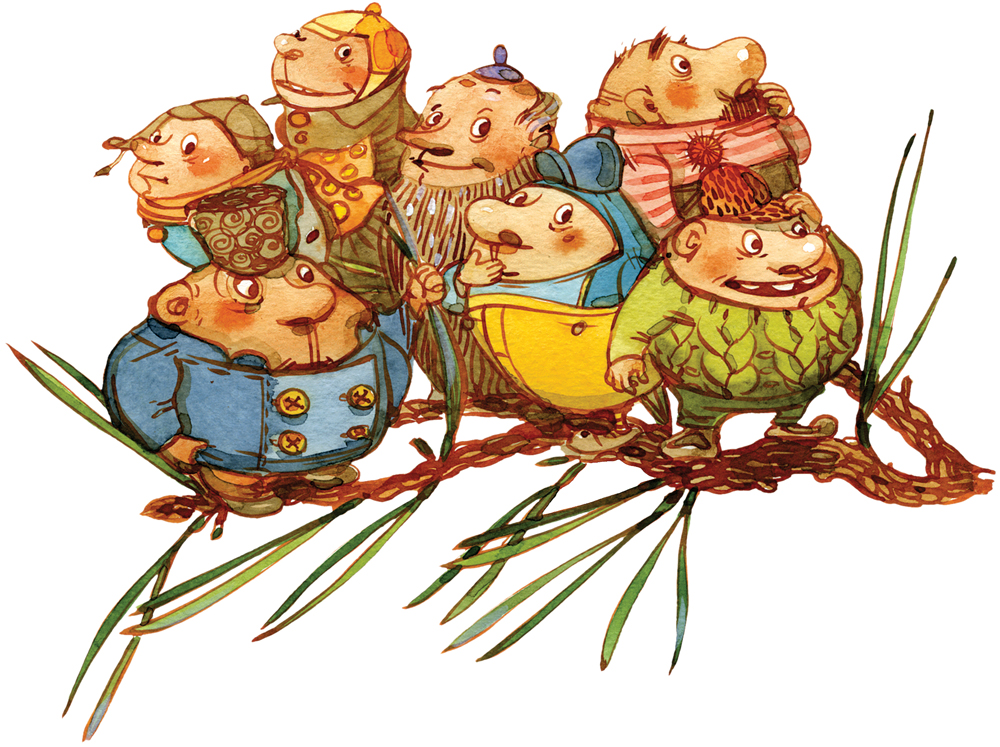 The sustainable use of the vast northern forests has an enormous and positive role in the fight against climate change. For the Christmas season, forest.fi publishes a new perspective on the topic. With it, we wish you a Merry Christmas and a Happy New Year! We will be back next year with the latest stories.

There are countless carbon brothers in the world. They are all so small that they cannot be seen at all with the naked eye. Nor even with a magnifying glass. You need a powerful microscope to see them.

The carbon brothers travel the Earth forever. They are sometimes in the sky, sometimes in water, or above or under ground.

This is the story of seven carbon brothers who met each other in the sky after a long separation and told each other about their adventures. This is what they had to say:

One of the carbon broth ers had flown up to the sky from an old-fashioned steam locomotive. Another one had been thrown up when a volcano erupted. The sky was filled with smoke and ash, and in the middle of it was this carbon brother. The third brother spoke about a great forest fire.

Six of the brothers had wild and hair-raising stories to tell. Only the seventh brother kept mum. He had just spent time in a cow’s stomach, and he felt there wasn’t much to say about that.

The seventh brother – the one who’d just come from a cow’s stomach – wanted to stop his brothers before they got to the dinosaurs and meteors. Instead, he suggested a competition.

“Let’s all leave the sky at the same time and the one who comes back last is the winner.”

Everyone thought this was a great idea. Would they need some rules? Indeed they would, for otherwise everyone would immediately dive into the sea and all seven brothers would be away the same length of time. They’d not be able to have a winner that way. They decided that they’d first go into a living tree, and that the tree should be a pine. Each of them chose their own pine, and so the competition began.

The story of the first Carbon Brother, which begins with cleaning

The two children Emma and Lucas were cleaning. All kinds of toys had piled up over the years, and it was impossible to find a place for them all. Mother and father suggested tactfully that perhaps some of the toys could be recycled.

But that was not an option. Absolutely any of them could still be needed some day. Then Emma came up with an idea. “Let’s pack some of the toys in a cardboard box and take them to the attic. We can always bring them back downstairs from there.”

This was what they did. Father brought home a big cardboard box into which the toys were packed. Together with the children, he carried the box up to the attic. On top of the box they wrote: “Emma’s and Lucas’s special toys”. The first of our carbon brothers was also carried up to the attic. He was inside the cardboard, but how did he get there?

Trees had been felled in the pine forest. The carbon brother was in a long, slender pine. The pine logs were taken to a mill that manufactured brown paper and cardboard. The carbon brother went through quite an adventure in the mill. With the log, he was taken to debarking, chipping, cooking, washing, grinding, mixing, straining, pressing, drying, reeling and whatever else was done to the logs in the mill. The toy box stood in the attic for years. And it was never needed, as you’d probably guessed already.

As adults, Emma and Lucas moved to homes of their own and the box was left in the attic. Then their mother and father decided to move to the country and the toy box was discovered again. It had become damp and brittle and you could no longer even lift it up. Emma and Lucas came to fetch their toys. The box would probably still have been okay for recycling, but Father decided to burn it in the sauna stove. So, finally, the carbon brother hiding in the cardboard was returned to the air.

But what about the toys? Perhaps Emma’s and Lucas’s children will play with them some day.

And what happened to the other carbon brothers?

The seven carbon brothers in our story – like any carbon – can become part of a pine when the tree has green needles, there is no frost and the sun is shining. Trees and other plants produce food for themselves from carbon, in order to live and grow. The carbon is freed from the tree when the wood is burned or decayed.

As we know, the tree in which the first carbon brother was hiding was felled and taken to a cardboard box factory. Finally, the box was burned in a sauna stove.

The second carbon brother chose a tree that was used to make a little stool, which also came to be burned at the end of its life. The tree of the third carbon brother was taken as wood chips to a power plant which produced heat and electricity for the nearby town. The fourth carbon brother is sitting in a pine in a primeval forest and will stay there until the tree falls down and decays. The fifth carbon brother ended up as part of the wooden house of an elderly couple. He will be able to stay there for a quite long time.

The sixth brother will be turned into biodiesel some day. When the diesel is burned in a car engine, he will return to the air.

The seventh carbon brother chose a pine in the middle of a mire. When the pine grew old and plopped down into the mire, the brother went down with it. Under the water, covered by mud, the pine won’t burn or decay for a long time.

“I bet you I am the winner!” the seventh carbon brother rejoiced. And so he was, too.

“Congratulations to the winner,” said the other carbon brothers, when they finally met again. And then they left again to find new adventures.

The story and illustrations are from the book Seitsemän hiiliveljestä [The Seven Carbon Brothers], written by Jussi Akkanen and illustrated by Kati Vuorento.

The carbon cycle in nature

Forests have a significant effect on the amount of carbon dioxide in the atmosphere. Trees produce sugar through photosynthesis and use it for growing and as a raw material for other compounds.

As one of the raw materials of the compounds, atmospheric carbon dioxide is sequestered in wood: in the trunk, branches and roots of trees.

Carbon remains stored in wood until the wood or wood product is burned or decays. After that, it is released as carbon dioxide into the atmosphere. In this way, forests and, for example, wooden houses, furniture, books and paper act as carbon storages.