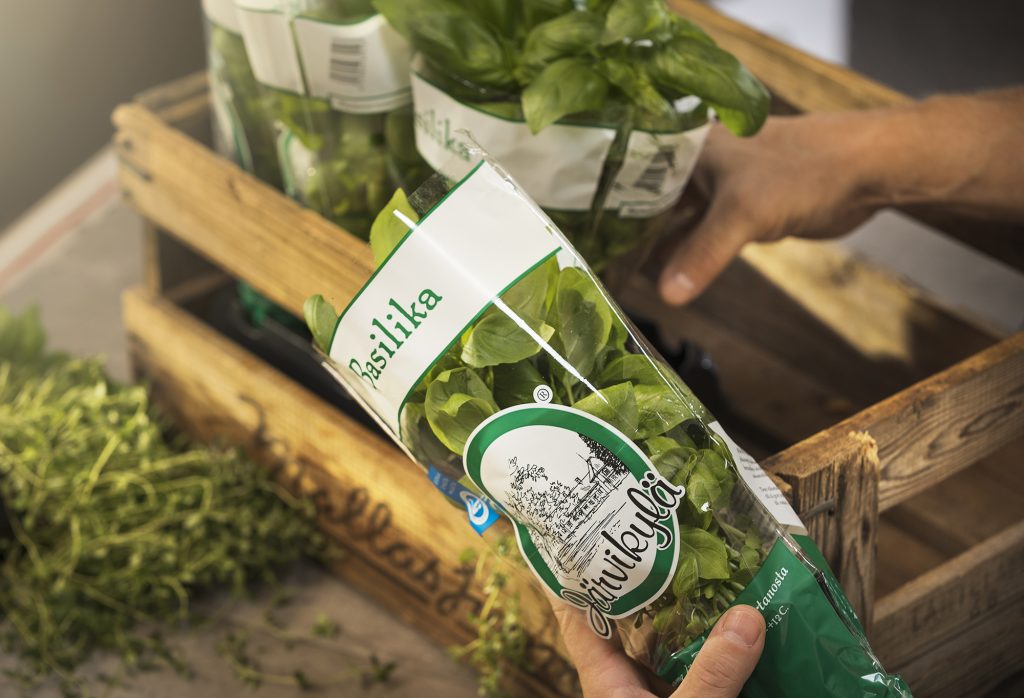 Woodly has told about collaboration with Järvikylä, which sells leaf greens in pots. Photo: Woodly

Jaakko Kaminen, CEO of Woodly, says that the rest of the material consists of ”naturally found, non-toxic and edible material”. This is more or less as much as will be revealed.

The raw material is not bio-based, though it could be that in principle. ”Sufficient amounts are not yet available on a commercial scale,” says Kaminen. However, he goes on to say that the share of bio-based material in Woodly can be increased as and when demand grows.

The Woodly film can be printed with text and images, and it can be recycled with plastic waste. ”With our partners, we are constructing a road map for scaling the production, and increasing the share of bio-based material in Woodly is part of that,” Kaminen says.

Woodly’s products can replace conventional fossil-based plastics in various packagings for consumer products in daily use, such as polyethylene, polypropylene and PET. According to a lifespan analysis by the Pöyry consulting company, the products are carbon-neutral and do not accelerate climate change.

The Woodly range is not biodegradable. ”Or at least, we don’t advertise it as being that, though there are bacteria in nature that can feed on our films,” Kaminen says.

This is a conscious choice. ”The way people understand it is that if you throw a biodegradable box by the roadside, it’ll simply disappear. This, however, is not how it works,” Kaminen says.

It is possible to make packagings that are rapidly biodegradable, but this comes at a cost. Almost all of the carbon contained in a product is released into the atmosphere in biodegradation.

Kaminen says recyclability is more important. ”That is an absolute must if we want to solve the plastics problem. The volumes of plastic used globally are so huge that it is absolutely impossible to replace them with bio-based products,” he says.

Previously Woodly has told about initiated collaboration with Järvikylä, which sells leaf greens in pots. In September 2019 the company has concluded a collaboration agreement with Wipak. Wipak manufactures packaging for food, pharmaceuticals and medical devices.

Wipak and Woodly aim at developing a portfolio of carbon-neutral plastic film packagings. Thanks to the collaboration, Wipak intends to halve its carbon footprint by 2025.