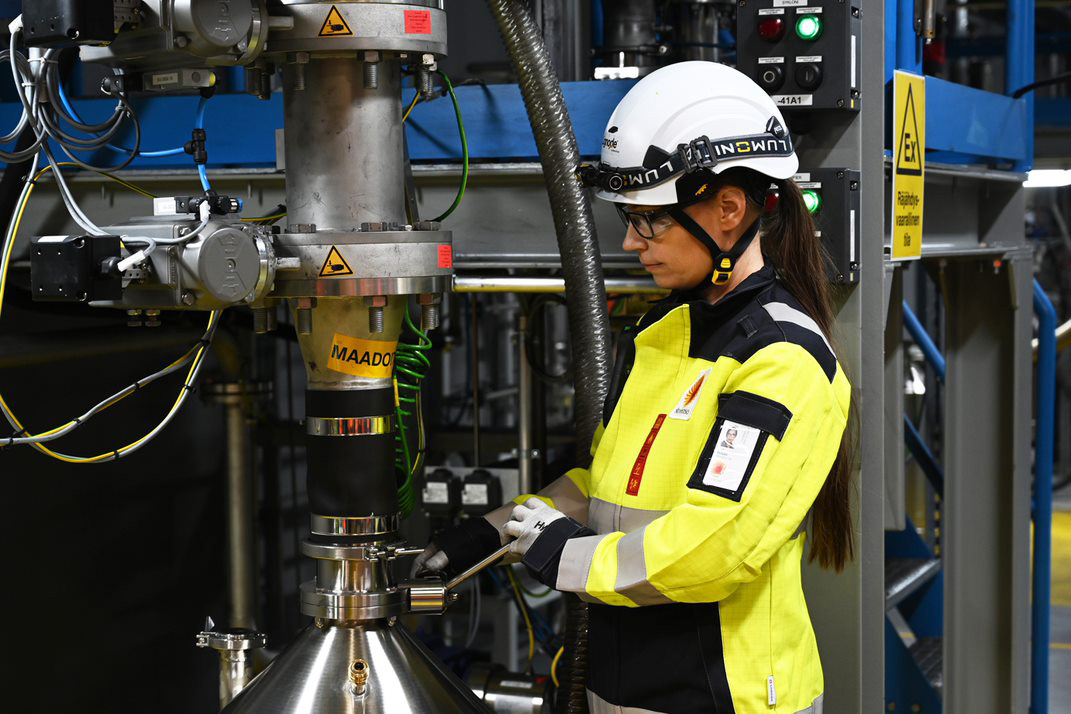 The battery cluster planned in Finland will acquire its first industrial-scale facility with Stora Enso’s plans to build an anode material factory, currently waiting for the investment decision.

Battery production will move into the bioeconomy era, as most of the anode material needed for rechargeable batteries can soon be manufactured from a wood-based raw material.

In producing anode material for batteries, Stora Enso is entering a completely new business. In principle, however, the production will not increase the use of wood to a great extent, since the material is made from by-products of the wood pulping process.

In practice, the relative value of what is produced may change radically. What has been the principal product so far, in other words, cellulose fibre, may end up being a by-product.

During the Capital Markets Day event organized for investors by Stora Enso last autumn it was stated that the company is expecting a turnover of a thousand of million with the production of battery materials and other lignin-based products.

Judging by the price of the end products and the production volumes envisaged, this may well be possible.

Even a rough comparison shows great promise: using the current average price per metric ton of USD 1,000, considered relatively high, it is estimated that the gain per kilo of the anode material would be 15–200-fold.

The quantities can also be substantial. It is estimated that in 2030, the annual demand for anode materials will be about a million tons in Europe and about four million tons globally.

Does this mean that the pulp from a pulp mill could actually become a by-product?

’Well, I can only be pleased if Sunila has two legs to stand on, instead of just one,’ says Timo Tidenberg, Director of the Sunila Mill.

The background to the anode material project lies in the continuous improvement of energy efficiency in pulp manufacturing. As a result, mills no longer need all of the black liquor (a by-product containing lignin) for energy production.

The surplus of black liquor has led to the search for a better use for it, and particularly for the lignin it contains.

The first stage was to find a way to separate the lignin. Sunila has produced extra-dry Lineo lignin since 2015. The production capacity is 50,000 metric tons a year.

A study on engineered hard carbon, which is another name for the anode material, was published by Stora Enso in 2019. The name is revealing: the material is hard, and the word ’engineered’ refers to the fact that it is an industrial product, not something found as such in nature.

Stora Enso’s engineered hard carbon is produced from dry kraft lignin by pyrolysis, which, in simple terms, means heating it to a high temperature in the absence of oxygen.

Lignode is the brand name of Stora Enso’s hard carbon.

Industrial-scale production could start in 2025

The pilot plant producing hard carbon was started in Sunila in 2021. By now it has been established that engineered hard carbon functions as an anode material and that manufacturing it is feasible. The next question concerns profitability.

Determining profitability was started in the summer of 2022 and was scheduled to be completed by end of year.

In the summer of 2022, Stora Enso announced it was designing ’a battery made completely of European raw materials’ together with Northvolt. In October, a cooperation agreement was concluded with Norwegian Beyonder to optimise the use of engineered hard carbon.

’All going well, the construction of a commercial-scale production facility will start in 2023. Production and expansions would then begin after 2025,’ says Kyckling.

It is fair to assume that the demand for engineered hard carbon will be high, for it has many good properties compared to graphite, conventionally used in batteries.

A Lignode battery can be charged up to 2–3 times more rapidly than a comparable one made of graphite, and its energy density is greater. This means it will not need to be charged as frequently, so fewer charging stations and associated equipment are needed.

A Lignode battery can be charged up to 2–3 times more rapidly than a comparable one made of graphite, and its energy density is greater.

Compared to graphite batteries, the maximum discharge rate is higher, which is useful when the need for power suddenly peaks.

The battery outperforms its competitors in cold conditions. With each charging, the graphite used in a battery expands by 6–7 percent, while engineered hard carbon only expands by 1–2 percent. A Lignode battery can thus be charged more times.

The environmental advantages are obvious. At the moment, over 95 percent of mined graphite comes from Asia. Mined graphite is toxic, and the mining conditions are often extremely questionable.

Many uses for lignin

The volume of anode material in a battery is 10–15 times that of lithium, so calling them wood batteries would make more sense in future. Using engineered hard carbon turns the battery into a long-term carbon storage.

After use, the hard carbon battery from an electric car can be recycled as a permanent energy storage next to a wind turbine, for example. Despite being aged, the properties of the battery will be adequate for years of storage use, and the carbon in it will be excluded from the atmosphere for decades.

The lignin content of wood is about one third, and it is the most common natural biomaterial after cellulose. The volume of lignin sidestreams from the world’s pulp mills is about 50 million tons per year, but only about two percent of that is processed  further.

At the moment, lignin is used to replace oil-based bitumen in asphalt, and also to make adhesives, for example – small wonder, since its natural purpose is to make cells stick together, enabling trees and other woody plants to stay upright. Other uses include paints and many special chemicals.

Lignin can also be used to manufacture carbon fibre, for the blades of wind turbines and vehicles for unprotected road users.