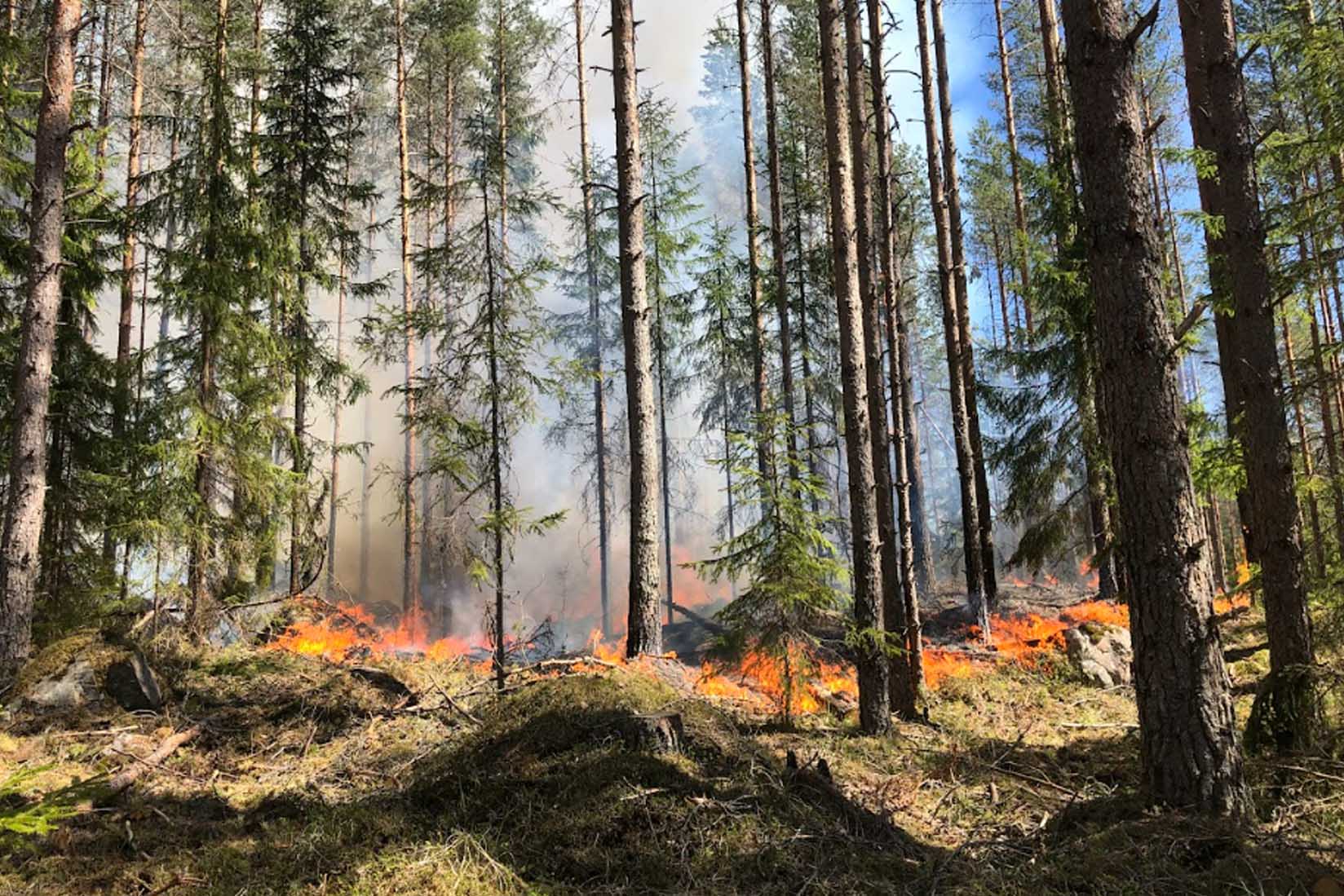 Forest fires, or wildfires, are a global problem. Last year in Europe alone, about half a million hectares of forest burned down. Photo: Eija Honkavaara

A Finnish research team is harnessing flocks of drones to detect forest fires and help in suppressing them. In Europe last year, about half a million hectares of forest burned down.

A flock of drones guided by Artificial Intelligence may in future trigger the alarm about a forest fire at an early stage. During a fire the drones will transmit data about its progress and predict how it will spread in the next hour.

’Forest fires are becoming more frequent, with the climate warming and environments becoming increasingly dry. Unfortunately, that’s going to be a big problem in the future,’ says project leader, Professor Eija Honkavaara from the National Land Survey of Finland.

Funded by the Academy of Finland, the project is scheduled to run in 2022–2024. The drones have already been tested last spring in connection with controlled burnings.

One of the world-class innovations in the Finnish research project is the use of drones flying in flocks. The project studies how to guide the flock to gather data on a fire.

The flock must be able to survey extensive forest areas and, where needed, to respond and act autonomously if a fire occurs.

Algorithms are being developed for the drones to detect smoke and fire at an early stage.

’In future, the patrolling by aviation clubs during the forest fire season can be replaced with low-emission activity based on drones, as soon as we can develop technology that is cost-effective and safe. Using drones, we could also patrol more frequently, which would mean that fires could be detected as early as possible,’  Honkavaara predicts.

According to Honkavaara, satellites can already transmit data on on-going forest fires, but data transmitted by drones would be more exact and comprehensive.

Information on combustibility of tree stock

In the event of a forest fire, the drone flock can be used to model its progress, taking into account such things as the tree stock, topography, vegetation and wind direction. These predictive models are used to teach the AI, which will estimate the progress of the fire in real time on he basis of the remote sensing data available.

’Remote sensing allows us to find out what tree species there are in the area and what their condition is. Actually, we’re able to estimate even how dry and combustible the trees are,’ says Honkavaara.

AI to interpret the fire

The drones transmit valuable data of the progress and intensity of a fire.

’Automated, AI-based methods enable us to monitor the fire front and the various parameters of the situation, such as flame height,’ Honkavaara says.

’Is it a ground fire or a canopy fire with explosive rapidity? Burning debris may be flung outwards into adjacent areas, and new fires may erupt. Drones are also good for spotting these,’ she continues.

Automated, AI-based methods enable us to monitor the fire front and the various parameters of the situation, such as flame height.

Simulation can also be used to plan effective suppression measures, such as where it will be useful to create firebreaks.

’Information about how the fire progresses can be shared with the firefighters. The same geospatial or situational image system can also include information on the location of people on the ground. It is very important in terms of safety that we can monitor the direction of the fire and smoke,’ Honkavaara notes.

The project aims at developing a collaboration between humans and autonomous systems. According to Honkavaara, one of the research questions is how the data gathered by drones can be utilized in practical firefighting and rescue work.

’A possible model would be to transfer the data to the rescue centre, and then to send all essential data on to the fire site. I can’t say as yet which would be the best option. That’s something we have to investigate,’ Honkavaara says.

At the same time, the researchers are considering the future of aviation.

’There are also manned helicopters over the fire site. An important question to settle is how to share the airspace safely, with both drones and helicopters buzzing about,’ Honkavaara points out.

Use of elevation models and forest data

The project studies the use of 5G and 6G technologies in data transmission. Honkavaara says that among others, the project will use the elevation models and topographic data of the National Land Survey of Finland, the forest data from the Finnish Forest Centre and the meteorological data of the Finnish Meteorological Institute.

According to Honkavaara, the technology is scaleable, so it can also be taken into use outside Finland.

’Finland is a good environment for studying these matters, since we are in possession of cutting-edge data, but similar data sets are also becoming available elsewhere,’ she notes.

Are the Finnish Defence Forces interested in using drone flocks?

’The Defence Forces can make use of drones in many ways. In the war in Ukraine, for example, drones have been an important tool,’ Honkavaara says.

Can drones also discover remaining hot spots,not yet burning after extinguish of fire?