To reach sustainability, we should consider what kind of world we actually want. Policies that are designed to control progress at molecular level will in practice prevent innovation and solutions, writes Lena Ek.

The Earth Summit in Rio de Janeiro in 1992 put focus on the environment. It was the right thing to do at that time. However, without wishing to belittle the process that followed, it was not until 2015 that we finally came up with the United Nation’s 17 Sustainable Development Goals and then the Paris Agreement the same year, which emphasizes them as a condition for sustainable climate change combat.

This is a change. On the track that started in Rio we had stovepiped environmental issues and lost sight of the fact that they are part of a larger whole and must therefore be balanced against several other goals. In other words, we have to weigh the environment against economic, social and environmental sustainability.

This is a major step. Even though it feels natural, it represents a new way of thinking and leading.

Let me give an example. The Swedish Wood Fibre Act from the end of the 1980s meant that politicians decided to send sawmill chips to plywood manufacturers and not to make pellets, because they thought that burning them as pellets is not as environmental as making board of them.

The only problem was that plywood manufacturers could not use all of the chips, which meant that they were left to rot.

The reason was a lack of trust. The politicians thought that businesses have no other goal than to gain revenue as easily as possible.

However, if we want to solve the challenges of climate change together, there must be a certain degree of trust in the business sector and the market.

It is not a secret that we in business are remobilising. Our pulp mills are now biorefineries. They produce not only packaged pulp, but also power and heat for ourselves and the rest of the society. In addition to this, we get a wide range of residual products that we use and develop to, for example, replace plastics and fossil energy.

However, some people claim that we are burning down our forests. This discussion is patently absurd.

A forest owner’s core business is saw logs. Without sawn timber, which is used for long-lived products, forest management would not be profitable. This means that to develop bioeconomy, we have to increase the demand for saw logs.

By doing this, we also increase the supply of renewable materials and products in the form of biofuels, textiles, packaging and chemicals.

To build a house for four people, we need 40 cubic metres of timber. When the trees for this house are harvested, all of the trees is used, but all of it cannot be used for building the house.

Branches and treetops cannot be used for boards, and chips from the surface of the logs are left over when the log is sawn. What do we do with all these residues?

Because of building the house, we are also releasing enough energy to heat the same house for two years, generating enough electricity to supply the household for three years, enabling paper production equal to more than ten years’ consumption by the four-person family, producing textiles equal to 25 years of clothing per person and enabling s production of biofuel equivalent to 1.7 megawatt hours.

But this is possible only if we can produce not only sawlogs, but also pulpwood and biomaterials that can be sold on the market.

Wood construction gives all the other benefits as well

So how can we speed up bioeconomy? First, go home and start building with timber. Make small buildings, large buildings, huge buildings. And after that, all the other climate benefits will fall into place.

This makes it easy to realize that the production of short-lived products cannot be separated from long-lived ones. They are part of a whole, the two sides of one coin.

However, some people think that the positive effects of timber construction are too small. To tackle this ideology, turn the question upside down and ask what you would get from using concrete only.

The answer is simple. You get emissions.

The carbon dioxide emissions from the production of concrete buildings compared with a timber-frame building are twice as high. The number of truckloads to a construction site for a multifamily residential building made of concrete in Sweden is 232, but of timber, 47.

This being true, why is there so much concrete and so little timber-frame construction? One reason is the price: timber is about ten percent more expensive per tonne.

In Sweden, this difference has meant that 90 percent of construction uses concrete, and 10 percent uses timber. But we do know that if the concrete industry bore its own costs for absorbing the carbon dioxide emissions it produces, the price of the materials would be the same.

Local decision-makers can make the change

This is a situation that can be tackled in several ways. Every country should find its own solutions. I only want to point out that wood holds a key role when we speak about sustainable cities.

In Växjö – where Södra has its head office – the municipality decided that half of all new buildings constructed must have a timber frame.

And do you know what? They have been successful. Local decision-makers can make a difference, you do not need to wait for government programmes and state subsidies.

This stimulates industry investments. Södra produces prefabricated timber modules in the same way as precast concrete wall panels are made. We are able to construct four timber-frame buildings in the same time as somebody else constructs one concrete building.

In addition to this, the construction site is healthier and safer and because of fewer truckloads, the quality of air and traffic safety in the cities improve.

It is our duty to shift the focus from problems to opportunities. Not least because environmental debate today is all too often alienating itself from people. It revolves around the ideas that we are too late, that the doomsday is coming and that we have to shrink the economy.

No one who drives reforms that will make life considerably more difficult will win any votes, or change society. This is the idea of the UN Sustainable Development Goals.

They were designed to advance the society – not to hold back. 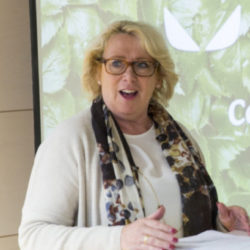 Lena Ek is Chair of Södra Skogsägarna in Sweden. The article is based on her presentation at the Forest Academy for EU Decision-Makers in November in Kärkölä, southern Finland.