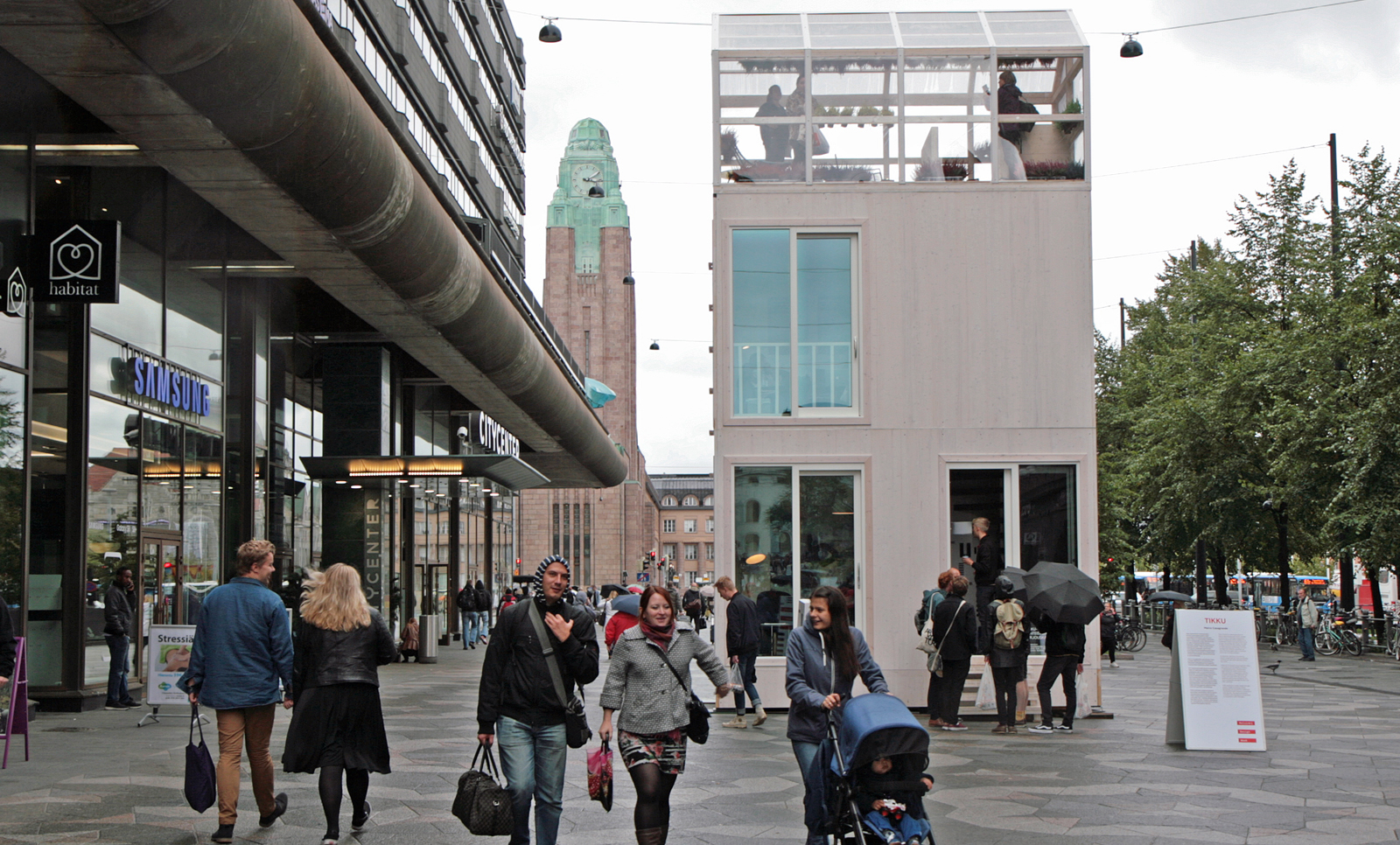 Queues attracted by the Tikku house by PEFC Wood Work on Keskuskatu in central Helsinki during the Helsinki Design Week. Photo: Anna Kauppi

In connection with the assembly a series of events will be organised during the week of 13 to 17 November 2017. A total of 200 participants from 50 countries are expected to attend the assembly.

Despite the strong involvement of the Nordic organisations of family forest owners in establishing the PEFC forest certification system (Programme for Endorsement of Certification Schemes), none of them have so far hosted the General Assembly of the PEFC. This is due to at least two reasons.

”The PEFC has expanded strongly for several years, and the new member countries have often wished to underline their commitment by hosting the assembly,” says Jan-Erik Enestam, chairman of the PEFC Finland. Another reason is that the PEFC has had a strong position in the Nordic countries with no extra effort.

There was, however, something that made it appropriate to organise the assembly in Finland just now: the centennial celebrations of the country. Thus, the PEFC week is part of the official celebrations.

An extensive review of the Finnish forest sector is presented during the week. The overarching theme of the week is Making Certification Smart.

The General Assembly is the highest decision-making organ in the PEFC system, and it is organised annually.

The week starts with inter-organisation educational and other events open to representatives of the PEFC organisations from different countries on Monday and Tuesday. One of the themes is the updating of standards of international certificates.

Wednesday is the day of the official General Assembly, starting with a welcoming address from the Finnish Government. Several seminars and other events are organised on Thursday, after which there is a 1.5-day excursion starting in the afternoon.

In addition to the PEFC members, stakeholders and partners, all those interested in sustainable forestry are invited to participate in the events of Thursday and Friday. New and future technologies used in auditing, gathering of information as well as in the mapping and monitoring of forest resources are presented on Thursday.

A special role is reserved for partners and technology providers, who will present the responsible forestry and technological know-how in Finland and the other Nordic countries.

”We believe that even countries with a weaker forest-related infrastructure can benefit from the solutions on offer, allowing them to leapfrog entire generations of technology to adopt the most up-to-date ones,” says Auvo Kaivola, Secretary General of the PEFC Finland.

An exhibition of the multiple use of forests will be opened in the PEFC lounge of the conference hotel on Tuesday.

The excursion is expected to attract several bus-loads of participants. The first stop will be the city of Jyväskylä in Central Finland, where the participants will stay overnight.

Friday morning will be spent on a harvesting site in the forest and in the afternoon, the participants will visit the newly opened bioproducts mill of Metsä Fibre in Äänekoski.

Because the updating processes of the content and activities of the PEFC will continue into next year, the agenda of the General Assembly in Helsinki will only contain its statutory business.

”In Finland we are strongly of the opinion that the PEFC should increase its international visibility. That would bring the greatest benefit to our stakeholders,” says Enestam when asked about the updating of the strategy.

Another thing under review is the practical implementation of international activities. ”At the moment we have close to 50 members, but the procedures and forms of our internal activities date back to when we were only ten,” says Enestam.

The unity of the PEFC system has been strongly challenged from the outside. There has been talk about weak links in the system – about countries with a crucially lower level of certification than that in others.

However, this does not come as news to Kaivola. ”We’ve seen the same thing happening throughout the history of the PEFC and it’s always been targeted at individual member countries, one after the other. At the turn of the millennium the ’bad boy’ was Finland and the heat was really concrete,” says Kaivola.

Many other members have had their turn. ”This is part of our life, but we will deal with it with systematic work and well thought out communication,” says Kaivola. ”The only thing is that this takes up resources that could also be used in other development work.”

During his service as Minister of the Environment in Finland in 2003–07, Enestam often puzzled over the activities of the environmental organisations: ”Why don’t they join the PEFC? As a rule, they are trying to get in through doors that are closed. But here’s a door that is and has always been open.”

This is the more puzzling because, in practice, the general level of forestry in Finland is defined by the PEFC processes. The guidelines of the PEFC are clearly more stringent than the official guidelines of authorities and the legislation. What is more, the PEFC forest certification covers 85 percent of the commercial forests of Finland.

More about PEFC week and a link to the registration

PEFC participates in building the future

PEFC had a visible presence at the Helsinki Design Week in September. In the space of one night, a house was constructed of massive-wood elements in the centre of the capital, inside just one parking space.

The three-storey Tikku (“Stick” in English) house comprises close on 40 square metres. According to its designer, architect Marco Casagrande, the starting point was to respond to the future challenge of high-density residential construction.

The Helsinki Design Week is the largest design festival in the Nordic countries, and PEFC Wood Work has already participated several times. The purpose is to reach people and bodies responsible for selecting the materials used in construction projects.

The installations and works presented illustrate the journey of timber from the forest to completed products, and increase awareness of the value of sustainably managed forests.

This year’s contribution was also designed to highlight the Finnish tradition of timber construction. The massive-wood structures in the Tikku house were constructed in Woodpolis, a centre of wood construction education and product development in Kuhmo, eastern Finland.

Previously in forest.fi: Co-operation to produce innovations in the northern forest