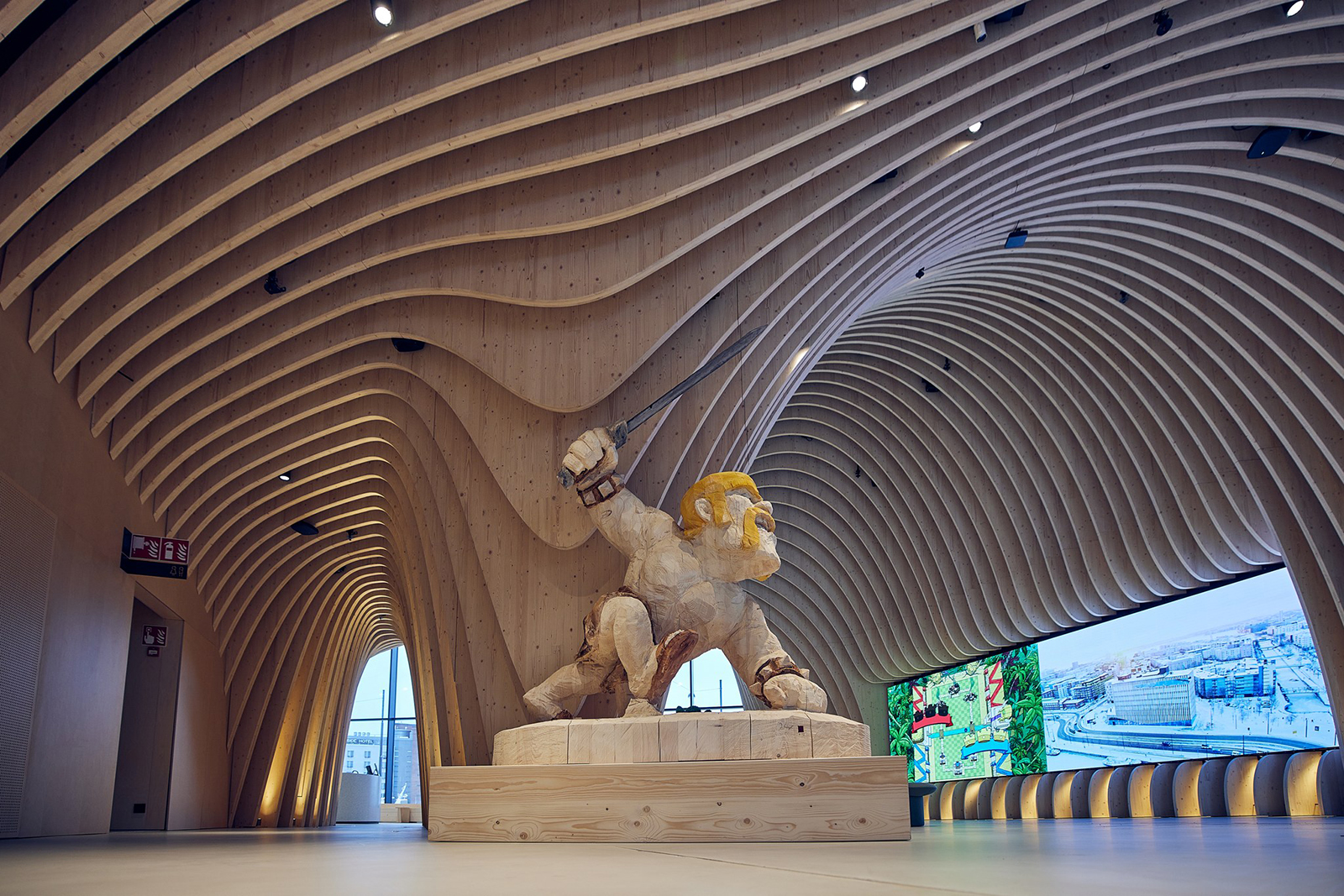 Wood has made a definite breakthrough in large, imposing office buildings, such as those used for corporate head offices. forest.fi found four interesting examples in Europe.

1. Supercell built a home for coders

Supercell, known for its games Hay Day, Clash Royale and Brawl Stars, started in 2010 in a modest office of 35 square metres, with a workforce of 13, laptops and a coffee machine. The company recalls on its website that the CEO sometimes had to move the packing case doing duty as his desk into the hallway to make space for other people.

Last January, Supercell took possession of the first office space it owns instead of renting. The eight-floor building in Helsinki is where most of the company’s hugely popular games are designed.

’We wanted to build a home. We wanted a place where our employees can fully focus on games development, without anything disturbing them,’ says Project Manager Janne Saarinen from Supercell.

All office space in the building is adaptable.

’In the games industry, the composition of teams can vary quite rapidly. Now, we can adapt the space reserved for a team over a weekend, simply by moving the walls,’ Saarinen says.

Most of the cabling for the work stations is installed under a raised floor. There are no socket columns or flexes hanging from the ceiling.

’’We can optimize lighting, heating and ventilation separately for each space,’ Saarinen says. In all, the building contains 450 kilometres of ICT cabling.

Supercell opted for a wooden building, for according to Saarinen, it is constructing for the future.

’We wanted our project to support the development of wood construction. Our new home is proof of the skill in Finnish wood construction and a pioneer, and we’re really proud of it,’ Saarinen says.

’Wood brings warmth and a feeling of home into the office. We hope that this solution will increase wellbeing at work,’ Saarinen says.

Measured by the quantity of wood, Supercell’s head office is the largest wooden office building in Finland. The two lowest floors in the building and the lift shafts are made of concrete. Most of the rest consists of spruce from the province of Savo, delivered by Stora Enso. The company calculated that the wood used in the building binds carbon dioxide to correspond to the annual emissions of 600 passenger cars.

The construction was a challenge, for as much as 70% of the plans were modified during the process. The structural engineering is by Sweco.

The City of Helsinki awarded its Rose of Construction 2020 to Supercell’s head office. The building can be viewed via a video by the newspaper Iltalehti.

Macallan Distillers in Scotland wanted a building that would highlight the stages of making whisky. The result is a building that houses the Visitor Experience with a fully glazed wall affording a view of three still houses and the mash house, all under the same roof.

The roof is made of LVL panels and beams by Metsä Wood. There is no ceiling. ’We wanted to highlight the honesty of the materials. Using gluelam beams also helped create a modern appearance,’ says Toby Jeavons, of Rogers Stirk Harbour + Partners who designed the building, in Metsä Wood’s media release.

The building contains thousands of wooden elements. They were made at the Wiehag factory in Austria.

The roof panels, for example, had to be extremely thin, closely finished and accurately sized, says Johannes Rebhahn from Wiehag. Rebhahn describes the project on the video Talking Wood.

Jeavons is pleased with the results: ’Through the glass wall enthusiasts can see how whisky is produced.’

The building was completed in 2018 and is located (linkki 6) in Craigellachie, Speyside in Scotland. The structural engineering is by Arup and the construction by Robertson.

The eight-floor Green Office Enjoy office building in Paris was constructed over a railway underpass. It forms the north-west entrance to the adjacent Clichy-Batignolles area.

The building was taken into use in 2018, and 15 percent of its floor area is in public use. One of its features is a landscaped courtyard area. About 1,250 people work in the building.

As the building essentially stands on a bridge, it had to be light in weight. This was achieved by using wood. Only the ground floor is made of concrete. It absorbs the vibration caused by trains running underneath.

The total floor area of the building is close on 17,000 square metres, for which 1,900 cubic metres of CLT elements made of cross-laminated timber were used. The total volume of wood used comes up to 2,700 cubic metres, which sequesters 520 tonnes of carbon dioxide. Carbon dioxide emissions caused by the construction were 2,900 tonnes less than for a conventional building of the same size. This corresponds to 23 million vehicle kilometres, writes the architectural publication e-architect.

The contractor for Green Office Enjoy was Bouygues Immobilier, and the structural engineering is by Structural EngineerAIA Ingénierie. The technical solutions are by Barbanel and the timber was supplied by Mathis.

4. Diesel went for wood in its office to reflect its brand

The Diesel apparel company wanted its Benelux head office to reflect its brand: raw, sturdy, natural that dares to be different.

The deadline was met thanks to the good cooperation between the architects, the consulting and structural engineers and Metsä Wood.

Diesel also wanted a space for fashion shows. This was realized as a large, open atrium, which meant that the roof structures would have a long span.

The solution was to use extremely strong Kerto LVL elements with lengths varying between 8 and 17 metres while still appearing lightweight. This can best be seen on the outdoor terrace, where the span is almost 16 metres, whereas the height of the elements is only 41 centimetres.

The sawtooth shape of the roof, 1,100 square metres in size, recalls factories previously located on the site, and also lets plenty of light into the building. Architect Dick Venneman from the Dedato office that designed the building considers the roof a masterpiece.

’The roof profile is a landmark. Inside the building, the visibility of wood brings warmth, not forgetting the added extra that the exposed wood combined with steel and concrete bring into the Diesel DNA,’ says Venneman.

The building was completed in 2014. The structural engineering is by Kooij & Dekker Ingenieursbureau, and the contractor was Herenbouw bv.

Have you seen interesting examples of wood construction? If yes, please let us know about them!