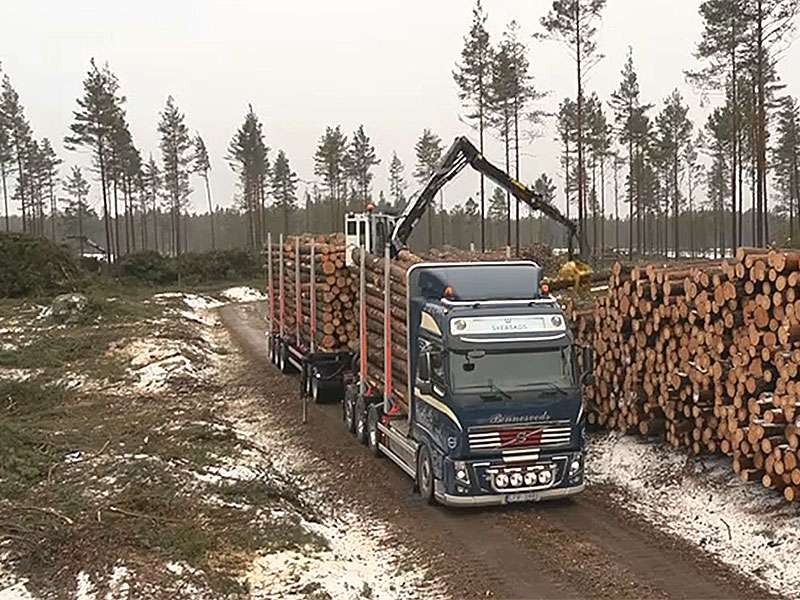 This is a 74-ton lorry tested in Sweden.

The maximum weights of lorries will soon be increased to 76 tons in Finland. 90-ton lorries would require a different construction which can be constructed in new lorry only.

Proposals to increase the maximum weight of heavy lorries were put forward by the forest sector long ago. The state-owned d forestry company Metsähallitus proposed this in 2008, but the Government accepted the idea only last November, after a proposal by the Finnish Forest Industries Federation in 2010.

According to the proposal by the ministerial group, the total weight of a lorry with nine axles could increase up to 76 tons. With fewer axles, the total weight should be lower. The current maximum weight allowed in Finland and Sweden is 60 tons.

The change in maximum weight could be approved for any lorry at once after the Government decree is passed, if the technology in the lorry is satisfactory. If not, the necessary modifications should be made and approved in connection with the next vehicle inspection.

The maximum height of the vehicle would also go up from 4.2 to 4.4 metres, but this change has no large relevance for timber transportation.

However, the Government cannot make this decision alone; it has to be approved by the Commission of the European Union. The plan at the moment is that, after approval by the Commission, the Finnish government could pass the final decision in early summer 2013.

Further goals are actually even more ambitious. The forest sector plans to submit to the Finnish Transport Safety Agency an application for testing lorries weighing 90 tons on Finnish roads.

The application is likely to concern a total of seven routes in different regions around the country. The plans also include the testing of a special lorry, which would carry forest chips in one direction and pick up a load of sawlogs when returning.

In Sweden, 90-ton lorries have already been tested and an application to continue the tests has been submitted. Next tests are to start this year and continue for five years.

A 90-ton lorry would also be longer, up to 30 metres, while the present maximum length in both countries is 25.25 metres. A longer length would be advantageous, especially for timber transportation, because of more flexibility in how to place stem bundles of different lengths in the lorry.

Other things to examine would be vehicle manoeuvrability on narrow forest roads and the effect of different types of tyres on the road and on fuel consumption.

The main reason to increase the lorry weight is cost. The Government proposal would decrease the forest industry’s transportation costs by 15–20 per cent. For the forest sector this would mean tens of millions of euros annually. The total savings in Finland would rise up to 90–250 million euros per year.

Traffic emissions would decrease by 10–15 per cent, as fewer lorries and less movement would be needed. According to Swedish studies, increasing the lorry weight from 60 to 74 tons would decrease the need for movement by a quarter, but if the maximum weight were 90 tons, the decrease would be 40 per cent.

To put these figures in context they can be compared with those in some Central European countries, where the maximum lorry weight is 40 tons. To transport the same kind of volumes, they need 50 per cent more movement than using the 60-ton lorry in the Nordic countries.

Decreased movement would also lead to better traffic safety. Increasing the number of axles would make the lorry more stable, among other things.

The possibility that overtaking a 30-metre lorry would be more risky than overtaking a shorter one has been studied in Sweden. The Finnish Transport Safety Agency considers that the Swedish studies do not point to an increased risk, but says more research should be carried out.

The forest industries consider that the reform would decrease the average stress on the road structures. However, not everybody agrees with this.

The Finnish Transport Safety Agency says that a strict prerequisite will be the use of double decks. According to the Roadscanner company, a 90-ton lorry would cause clearly larger depressions than current lorries, at depths of more than 10 metres in the road structures. On the other hand, the depression would be smaller than with 70-ton lorries, presumably because the latter have fewer axles.

As for bridges, modern ones would cope well with the increased weight. Old ones, however, would create problems, not only when crossing them, but also when driving under them, because of the increased height of the lorries. And in the event of accident it is always the driver that is responsible, instead of the transportation company, for example.

To begin with, however, heavy lorries would only be used on the main roads. Bridges in poor condition would thus be avoided.