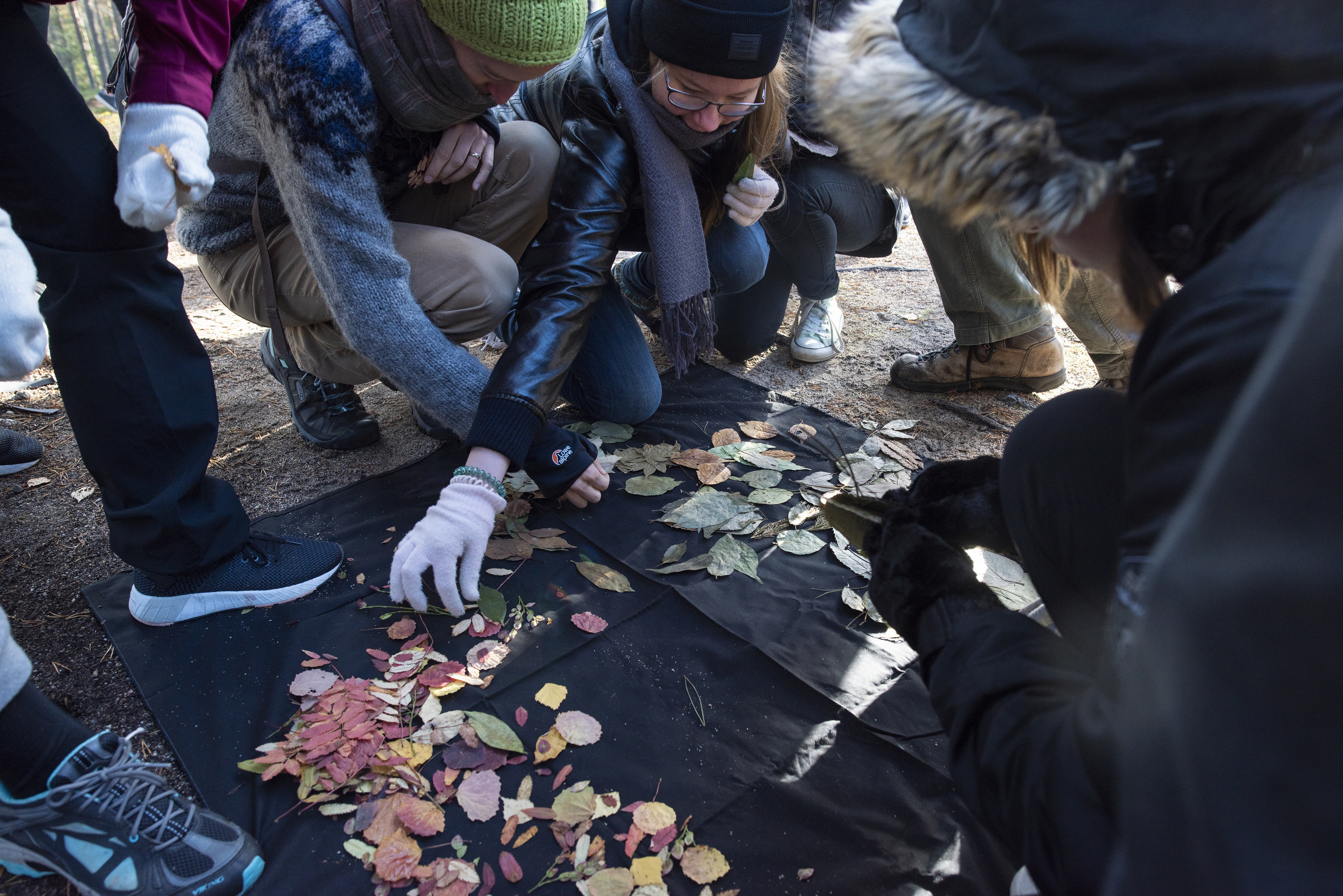 Among the most important things in the 13th European Forest Pedagogigs Congress were workshops, where the participants could exchange experiences and methods of education. In the workshop organised by Yusaku ”Nava” Hagivara, who came to Pudasjärvi from the Japanese Gifu Forest Science and Culture Academy, the participants rivalled each other in the battle of leaves, taking inspiration from the ancient Samurais’ fights. In addition to play, you can learn numbers, colors and formations in this game. Photo: Vilma Issakainen

Anxiety caused by environmental problems is increasingly widespread. There are, however, remedies available for the anxiety, and the best of them have one common feature: they are implemented in forests.

Panu Pihkala, Research Professor at the Faculty of Theology in the University of Helsinki, recently described the guilt experienced because of the climate change as so massive that people avoid talking about it altogether. Instead, ”concern for the environment is felt in secret,” Pihkala wrote in the periodical Kanava (6/2018).

And when the concern is not in plain sight, the usual interpretation is that it does not exist. Which, in turn, is likely to intensify the anxiety, up to actual physical pain.

Sini Harkki, Programme Manager of Greenpeace Nordic in Finland, quoted by the newspaper Tekniikka &Talous (2 October 2018), expressed concern over the ”increasing general feeling that there is nothing to be done” about the climate change and that we have missed the train. She later expressed the same concern in the daily Helsingin Sanomat (7 October 2018), saying that she herself believes in accelerating the new technologies.

But will that help, when it comes to anxiety felt by individuals? Maria Ojala, Associate Professor of Psychology at the Örebro University, Sweden, has this to say in answer: ”We can create hope with the very same tools that help us to get people to solve the problems.”

Ojala was one of the keynote speakers at the 13th European Forest Pedagogics Congress last week in Pudasjärvi, northern Finland. This year, the annual meeting of the forest pedagogues’ network was hosted by the Finnish 4H organisation and the Finnish Forest Association.

According to Ojala, there are two principal ways of coping with environmental anxiety: you either cope with the emotion or the problem causing that emotion. In practice, most of us use both methods.

Some focus more on the emotion, others on the problem. Each individual will consider the matter in light of their intention, or of what they actually want to achieve.

“Forests can be used here to formulate the problems in a more concrete way. The potential actions become more concrete and relevant,” says Ojala.

In Pudasjärvi, Ojala spoke about young people, but most of what she said also applies to adults. Adults, too, have emotions, and if young people do not always know that much about the problem causing anxiety, we may also ask whether the adults’ knowledge is all that profound.

According to a survey report published in September by the consulting company Pöyry, one in every ten Finns thinks that most of the carbon dioxide emissions are caused by nuclear power, when in fact, it does not cause any at all. Only seven percent of the respondents were able to name peat as the most polluting energy source in Finland.

Support only comes from other people

When the young look for trustworthiness in an adult, they often view adults with quite a lot of cynicism. What we’re dealing with here is the role of educator and teacher. The young basically want to be able to trust their teachers, and in this they should not be let down,” says Ojala.

How, then, should we respond to the concern expressed by the young? “You must be honest,” says Ojala.

Many think that honesty means painting threatening images. This, however, is only one side of the matter. “Of course you need to speak about threats, for they may even make the most likely scenario. But you also need to talk about utopias, and in addition to them, about possible futures,” says Ojala.

Anxiety is eased when you show the pathway to a future that is possible. Still, it should be a pathway that everyone is able to construct.

“You should not paint the future as something that is inevitable. The most honest truth is that the future is something that we construct. After saying that, you can ask if they want to be a part of this work and if yes, what their objectives are and how they can reach them,” says Ojala.

Emotions must be consciously regulated

There are many tools, also with young people. Ojala would recommend that they try to find adults who work with environmental problems. In this way, you can begin to feel confident that you are not alone with your concerns, and it may even lead to cooperation.

Ojala would also discuss how to affect environmental problems by how we lead our daily lives. And a forest is a very good place for talking about precisely those things.

“You should steer the young towards going beyond individual consumer decisions and striving for genuine citizenship – influencing the process of transforming individual decisions into practical outcomes,” says Ojala.

To the teachers Ojala speaks about critical emotional awareness. People always regulate their emotions, though sometimes on the basis of norms that they are not aware of.

Teachers are familiar with the problems caused by emotions. Anxiety may even lead to a situation where the young refuse to discuss its cause in the classroom. This worries teachers not only in itself, but also because it makes teaching and learning difficult.

When encountering anxiety, the individuals’ ways of coping should be brought under scrutiny. In order for this to succeed, teachers and educators should have examined their own coping mechanisms in advance.

Teachers are important role models for the young. “A teacher sets up, most often consciously, the emotional norms and rules for the classroom. How pupils perceive the teacher’s response to negative emotions can be directly seen in their coping strategies in similar situations,” says Ojala.

The importance of emotions for learning should be recognized, put into words and brought under conscious control. In a learning situation, the learners’ emotions should be taken seriously and not dismissed as irrelevant. When emotions are dealt with constructively, hopelessness will be replaced by meaningful action and constructive hope.

For some, it is easier to focus on hopelessness and helplessness, because then you need not do anything and can simply avoid taking responsibility. And if we want to help the world, we cannot do it from the depths of anxiety.

The young often view the world through problems. If we succeed in turning this into a strength, we will not only address the cause of anxiety – the environmental problem – but will also feel we can make a difference, live according to our conscience, learn new things and cooperate with our friends.

Then, if all this is done out in nature, we will have the added advantages of exciting experiences, practical and creative activities and occasions for both showing and receiving approval among like-minded people.