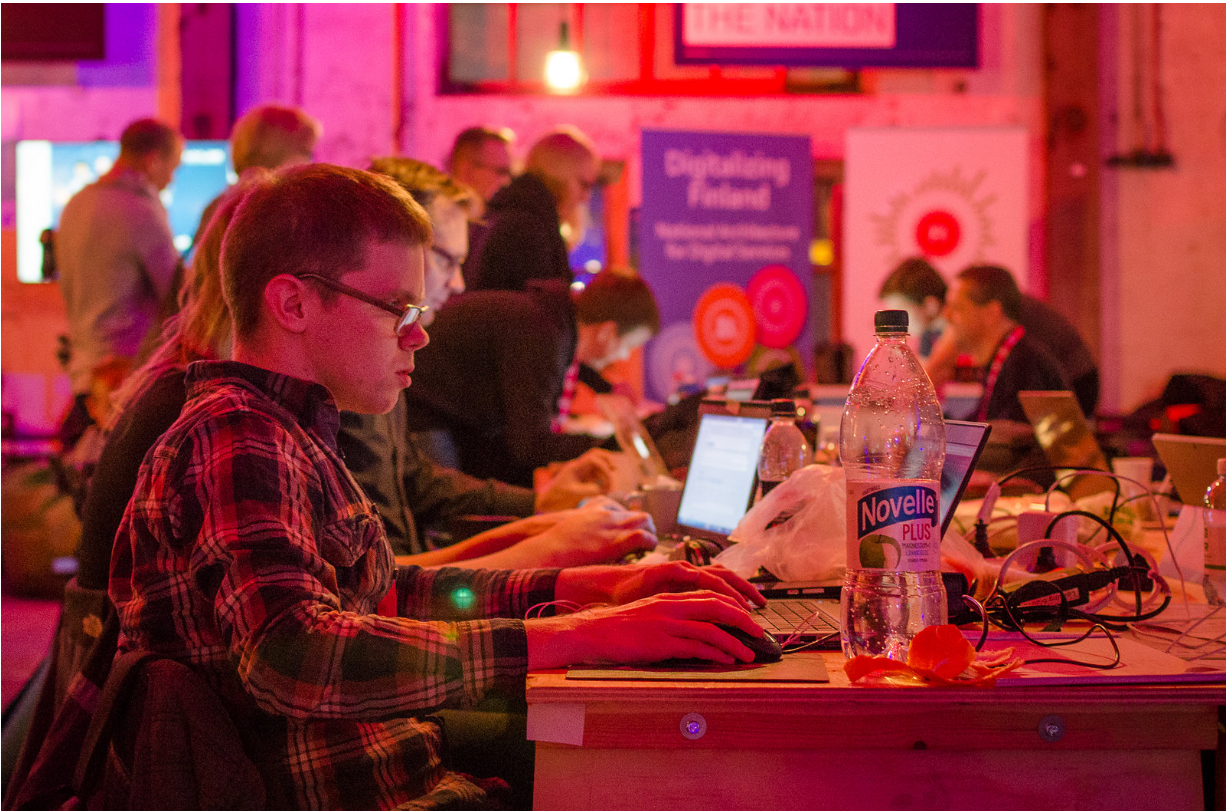 In the mood in Ultra Hack Sprint I Final in 2017. Photo: Veeti Haapsamo, Ultrahack

The data gathered from Finnish forests is among the best in the world, but so far it has not found a widespread commercial use. The ‘Hack the forest data’ competition invited proposals with only one constraint: they must make use of open forest data.

The kind of proposals that the organisers of the forest hackathon look forward to seeing include forest imaging based on data gathered by laser technology, improving the quality of forest data by crowdsourcing, thematic maps designed for specific end users, determining the connection between harvesting possibilities and road network and finding areas where the network should be improved, as well as simulations of forest growth and forest carbon sinks.

For use in tourism and recreation, the organisers would like to see a forest navigator which could be enhanced by virtual technology. To improve waterways protection, they hope for something like a GPS device for identifying valuable waterways.

All in all, the organisers received 31 proposals. They have chosen ten for the finals, and the winners will be announced on Sunday, 20 May.

In addition to the ten Finnish entrants, one extra participant was included. Ultra Hack, cooperation partner in the Hack the forest data competition, organised similar hackathon finals in India in April, and one of the Indian finalists was invited to the finals this weekend.

Only teams may participate

The competition was announced in January, when it was confirmed that the Finnish Forest Centre will launch an open forest data service. Thos means data gathered from forests that is accessible to all. This includes very detailed data on such things as timber resources and tree species, or data related to the soil and weather characteristics of a forest.

The data is gathered from the forests of all forest owners down to the level of individual cells in a 16 m x 16 m grid. However, it only includes environmental information and nothing connected to the forest owner – such as names and contact information, or boundaries or property identifiers of forest estates.

With the competition, the Forest Centre hopes to increase the use of open forest information, promote digitalization and diversify the supply of services.

Only teams may participate in the competition, but individuals were also able to submit their ideas. For individuals, a Pre hack event was organised in April, enabling them to network and perhaps create the team they needed.

”And indeed, there was some networking,” says Virpi Stenman, in charge of the Hack the forest data competition.

The deadline for entries was 4 May, when the finalists were chosen.

Products available through mobile application stores are looked for

A hackathon is a facilitated event where a group of people come together to develop solutions to pre-set challenges. The Hack the forest data competition is organised by the Finnish Ministry of Agriculture and Forestry, the Finnish Forest Centre and the Databio project funded by the European Union.

”Our partner Ultra Hack arranges the competition infrastructure, such as premises and technology,” says Stenman.

Stenman is pleased with the level of the entries. ”We went through the preliminary registrations to see whether each team really had the technical abilities needed. Obviously, not all of the 31 did, but the finalists certainly do,” says Stenman.

The competition looks for functional applications using forest data. ”Every finalist must be prepared to develop their proposal into a mobile application that can actually be sold within this year,” says Stenman.

Use for other open data sources also encouraged

The finals will start on Friday. The concepts will be further worked on and finalised during the three-day event. The aim is that demonstrations of all entries will have been finalised by Sunday, 20 May, which is when the winner will be announced.

The jury will make its choice on the basis of four criteria: novelty value, meeting the challenge set, value added for users and customers and the capability of the team. The jury consists of Jorma Jyrkilä from the Forest Centre, Niina Riissanen from the Ministry of Agriculture and Forestry and Stenman.

The competitors are also encouraged to link the open forest data with other open data sources. As examples, the organisers mention the data provided by the National Land Survey of Finland and Natural Resources Institute Finland, and also data provided by forest industries and forest owners, etc.

The sum of EUR 10,000 will be distributed among the winners. In addition to this, a ma-ximum sum of EUR 30,000 is reserved for the further development of one application, on condition that it will be commercially available by the end of the year.

Updated 21.5.2018: The winner of the Hack the forest data competition was RoadsML, with an application that monitors the condition of the road network. The application combines open forest data and road data to show the condition of the road network and the availability of timber stock to be harvested. The runner-up was Forest Risk Profile, with an application that identifies areas liable to suffer from forest damage on the basis of forest and satellite data. The application of the team placed third simulates and calculates the effects of forestry operations on the carbon sink of the forest by means of a carbon sink calculator.

The following entries were selected for the finals: