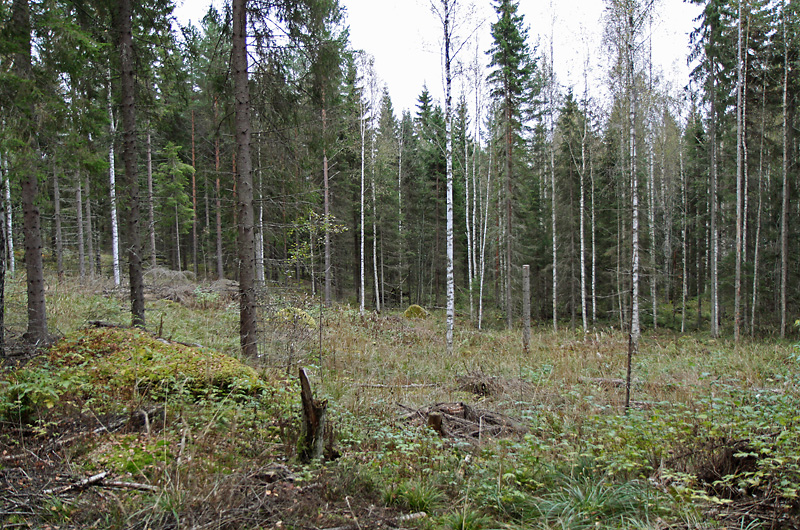 The average size of regeneration felling sites in family-owned forests in southern Finland is only 1.3 hectares. The figure has increased slightly over the past five years: in 2014 it was 1.2 hectares.

In Finland, regeneration sites have traditionally been smaller in family-owned forests than in other forests, and larger in northern Finland than in the south. This was also the case in 2018.

The site sizes have increased slightly over the past five years. In 2014, the figure in family-owned forests in the south was 1.2 hectares and 1.8 hectares in the north.

In Finland, some 80 percent of the timber used by the forest industry is procured from family-owned forests. All in all, some 1.5 percent of the area of Finland’s commercial forests is harvested annually. About half of that consists of regeneration fellings, and the rest consists of thinnings. The boundaries of logging sites in Finland are mainly natural. In commercial forests, the unit of management is a forest compartment, which refers to an area that is uniform as regards its vegetation, micro-climate and soil characteristics.

Small logging sites have been considered problematic as they tend to increase the cost of the harvesting operations. The smaller the sites, the more often you will need to move the expensive forest machinery between them, and during the move, the machinery actually loses money instead of bringing it in.

Up to 2014, the Forest Act prohibited regeneration fellings before the trees in a compartment were sufficiently large. The current act, however, allows regeneration felling regardless of tree size, which, in principle, opens up a way to increase the size of felling sites.

At the moment, two adjacent and similar compartments can be regenerated at the same time, even if the trees in the two are of a different age, as they usually are.

Erno Järvinen, Research Manager at the Finnish forest owners’ union MTK, says it does not appear that the current act has caused forest owners to manage several forest compartments as one to a noticeable extent. ‘I would, however, recommend this. Small compartments are a problem for the profitability of forestry,’ says Järvinen.

According to Järvinen, forest owners may not be fully aware of the opportunity brought by the current Forest Act. ‘Of course, this is something that all advisory staff should make sure to talk about,’ says Järvinen.

Continuous-cover loggings peaked because of snow

According to the 2018 statistics, the share of the area of continuous-cover loggings in Finland was 3.4 percent. Of this, close to one third consisted of small-diameter clearcuttings, the rest of selective loggings.

The figure doubled compared to the preceding year, and this is all marked in eastern Finland, where the share of continuous-cover loggings rose to 6–12 percent, depending on the region. In Northern Karelia, for example, the share increased twentyfold compared to 2017.

According to Markku Remes, Principal Forestry Specialist at the Finnish Forest Centre, the increase may be due to heavy snow damage in the regions in question. In wintertime, snow sometimes piles up in tree canopies and branches, causing them to bend and finally break in large quantities.

According to Remes, snow damage was particularly frequent in younger stands that were not yet ripe for regeneration. ’For the forest owner, continuous-cover logging was an obvious way to avoid planting or sowing a new forest. This would be required after a regeneration felling, and it would not have been very profitable in these forests, situated at relatively high altitudes and less fertile than forest lands in southern Finland,’ says Remes.

Remes estimates that this year the share of continuous-cover loggings will decrease from the 2018 figure and remain at 2–3 percent. ’As a matter of fact, the decrease already started at the end of 2018,’ says Remes.

In the long run, however, the share of continuous-cover silviculture is on an increase.

Environmental organisations have criticized the Forest Centre for not classifying the selective logging of the largest trees as continuous-cover logging. ’Our definition is that it is a selective logging only if you thin your forest more heavily than what is said in the forestry recommendations,’ says Remes.