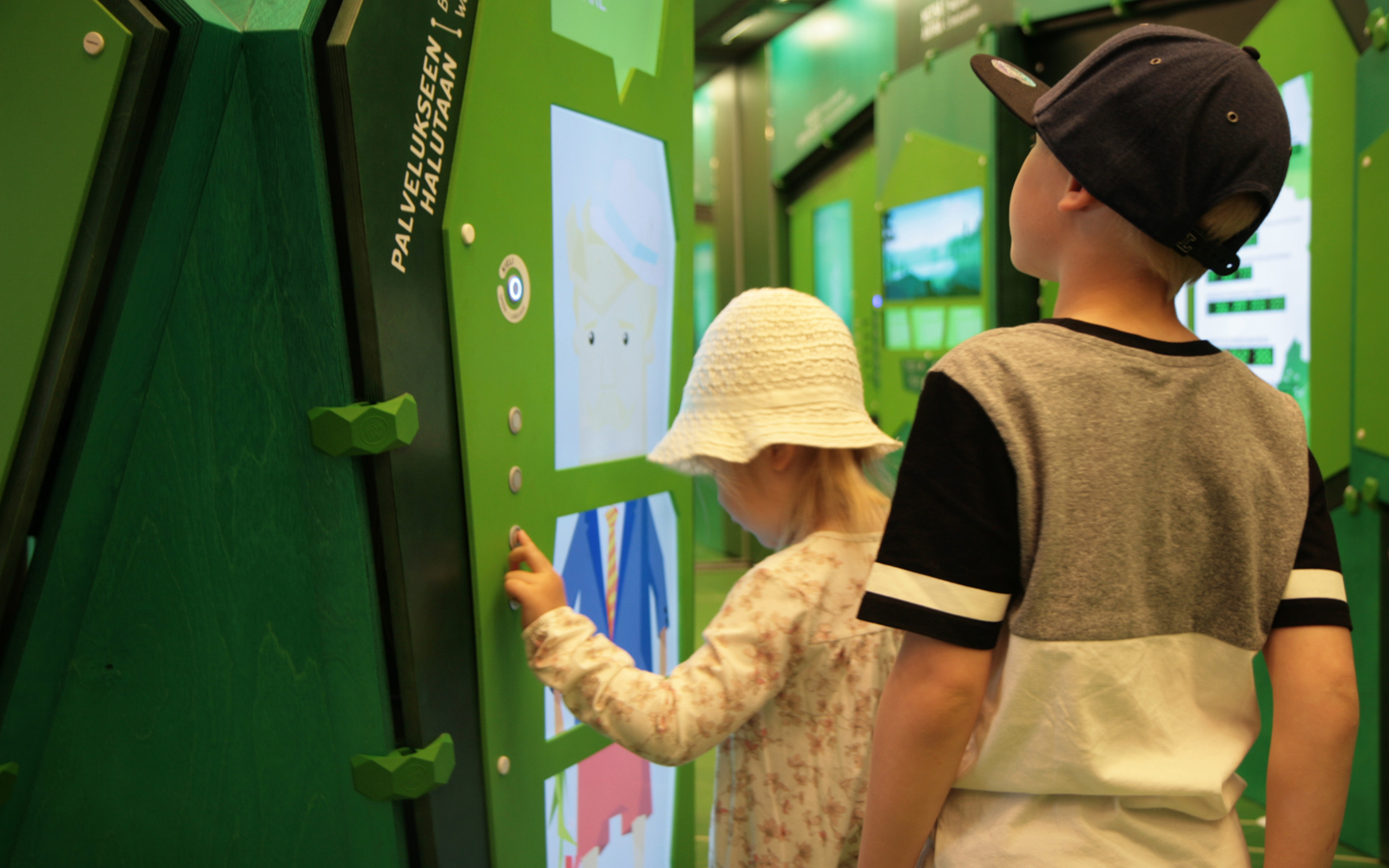 Although the Bio Era exhibition is not necessarily easy to understand, it has been so constructed that everyone can learn something about bioeconomy. Information is displayed as you press buttons, rotate grips and scan products. Photo: Anna Kauppi

The Finnish Forest Sector’s present to centenarian Finland is brilliant: a science centre exhibition mounted on a lorry to tour Finland. The Bio Era tour started in June and continues until November, but it has already received plenty of attention. forest.fi visited the future of bioeconomy at the popular Agricultural Exhibition in Seinäjoki.

On the walls of the travelling science centre, rows of flashing green digits report on the state of Planet Earth. The world’s population is steadily growing from 7.5 thousand million, and the carbon dioxide emissions will reach 17 thousand million tonnes this year. One of the fastest-changing figures is the number of emails: between midnight and noon on a summer Thursday, nearly 140 thousand million had been sent.

These large figures are part of the Bio Era event, which is currently touring Finland. The science centre exhibition is a real road show. The showroom is built in a trailer pulled by an American-style tractor unit – an eye-catcher on Finnish roads and at service stations.

“People often want to know what we’re carrying,” says Tomi Lohivuo, the Bio Era driver, who has thousands of miles of experience with big showroom lorries.

By now he has learned a good deal about bioeconomy, too. Lohivuo presents professionally the “hotties” of the exhibition, namely the latest and coolest wood-based products invented in Finland. His favourite is the “wood stone”, a construction material used in gardens, made of the wood material in construction and demolition waste.

The Bio Era tour offers an astonishingly broad review of the Finnish forest-based bioeconomy. The word bioeconomy in itself is fairly unfamiliar to many visitors, but they rapidly gain more understanding in the green science room at the back of the lorry.

“The Bio Era concept was invented for this tour, but surprisingly many visitors can form a clear picture of what it means: durability, forests, climate change, future directions and energy efficiency, but often also recreation,” says Heikki Hepoaho, who is in charge of the implementation of the Bio Era lorry and heads the Pilke Science Centre in Rovaniemi.

Technology and honesty highlighted in vision of future

The Bio Era event will visit a hundred localities during the summer and autumn. In June, it parked at the giant agricultural exhibition in Seinäjoki, which attracts 100,000 visitors. Colourful balloons of trade unions, political parties, meat processors and tractor manufacturers bounce in at the showroom door with visitors of all ages.

“Bio Era brings to mind the environment, energy saving and the intention to live well and sustainably on this planet,” says Eeva Ala-Heikkilä, sitting down near a low, luminous table in the bio lorry.

The table is a digital screen showing a word cloud, and it is one of the most interesting exhibits in Bio Era. Visitors can choose and drag what they think are the most important words to the centre of the word cloud, thus helping to create a future vision for centenarian Finland.

At the Seinäjoki Exhibition, the centre of the cloud showed words like equality, honesty and happiness, but also handicraft and space elevator. According to Hepoaho, the words change according to the locality and event. Seinäjoki exhibited some entrepreneurial spirit. A week earlier, visitors voted for innovations and technology when the lorry was parked by the Science Centre Heureka in Vantaa.

Arvo, a young boy from Jalasjärvi, took a long time to select his keyword. “E like Europeans!” the nine-year-old finally announced.

For young builders of future

The Bio Era tour is a joint effort by the whole Finnish forest sector. It is produced by the Science Centre Pilke. The main sponsors of the tour are the Finnish Forest Foundation and the Metsämiesten Säätiö Foundation.

The biofuel-powered lorry will journey throughout Finland and will stop in a total of one hundred localities. During the summer, the lorry will visit events such as the Farmari Agricultural Exhibition in Seinäjoki and the Suomi Arena Festival in Pori. In August, the exhibition will begin to tour schools: the target group of the event tour are young people 13 to 19 years of age, and the aim is to get them interested in bioeconomy.

The exhibition presents solutions offered by bioeconomy, whether to problems occurring in people’s everyday lives or to the great challenges facing all of humankind. It reminds us that in Finland, the basis of bioeconomy is sustainable forestry.

Wood is Finland’s most important renewable raw material, and its annual increase is considerably higher than its consumption. Wood is already used to manufacture textiles, pharmaceuticals and chemicals. It replaces fossil raw materials in plastics and in intelligent packaging, for example.

In each locality, a Bio Era fair will be set up around the lorry, with local bioeconomy actors presenting their activities. Other local events related to bioeconomy, such as factory visits or forest excursions, will be organized to coincide with the exhibition.

“It’ll go pretty high, but just sit tight,” says someone in the farthestcorner of the Bio Era lorry. Laura Kuusisto, in charge of the practical arrangements for the tour, assists Hannes Närvä in using virtual reality glasses.

“Wow!” says seven-year-old Närvä, who comes from the village of Koskenkorva. He has just sat down in the cab of a forestry machine and is flying over the tree tops – and has completely forgotten the animals he actually came to see at the agricultural exhibition.

“No shortage of trees to thin here,” says an older man next to Närvä, also viewing the felling site through VR glasses. “The visibility from the harvester cab is much better than you’d think,” he remarks.

Although the Bio Era exhibition is not necessarily easy to understand, it has been so constructed that everyone can learn something about bioeconomy. Information is displayed as you press buttons, rotate grips and scan products.

A group of local teenagers get enthusiastic about the new innovations to be evaluated by the public, to the extent that they give every one “Five stars, definitely”. The number-one favourite of the public in June was Biobattery, a new type of electricity storage system developed by VTT, that can be wholly made from renewable raw materials.

The Bio Era tour (in Finnish)