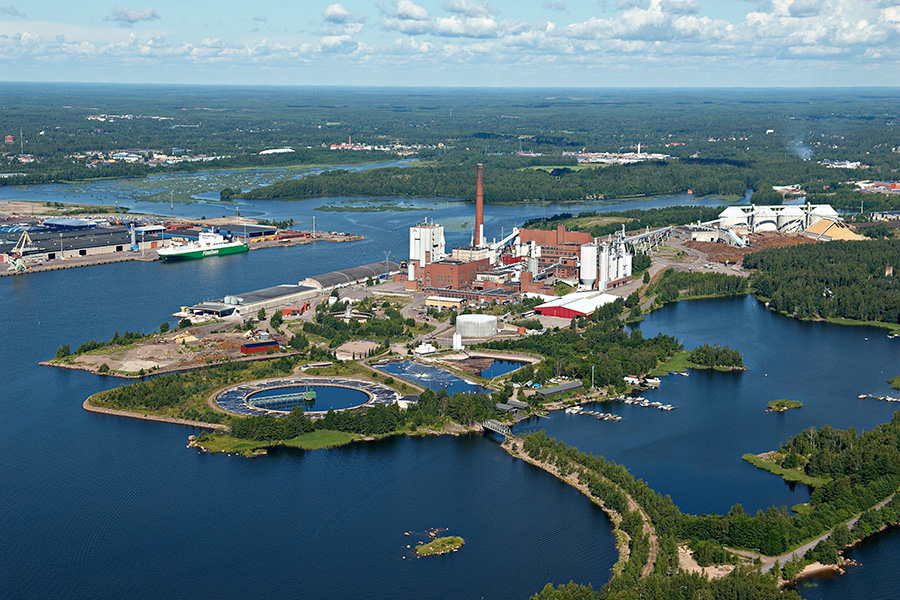 Lignin is one of the components of wood. Even until now, it has been possible to buy and sell lignin, but now its markets are increasing significantly. New demand as well as supply is emerging simultaneously.

Demand is created when the petrochemical industry is replacing some of the oil used as raw material with a condensate based on shale gas. “This means that the process produces less aromatic hydrocarbons as a by-product,” says Mr. Ali Harlin, Research Professor working in the Bioeconomy Transformation research project at the VTT Technical Research Centre. This is where lignin comes in, as it is a polymer formed of aromatic compounds.

The other side of this particular coin is that new supplies of lignin are created in the forest industry. Traditionally, lignin has been used as a source of energy in pulp mills, but the increased energy efficiency of pulp manufacturing has led to a surplus of lignin.

In practice, this has created a situation where pulp production has had to be limited. “Previously, a pulp mill could more or less use all the lignin it produced, but this is not the case any longer. This may be one of the reasons why other uses of lignin are not a very hot topic of research,” says Mr. Kalle Ekman from Stora Enso’s Imatra Research Centre.

Chemical pulp is made by boiling wood chips in a mixture of chemicals. The process separates lignin, which is the “glue” attaching the pulp fibres to each other. The result is pulp and black liquor.

The lignin and other organic substances in it are then burned in a recovery boiler to produce energy, and the chemicals used in the boiling are then regenerated and reused in the pulp production process. This process of burning black liquor and recycling the boiling chemicals is often a bottleneck in the pulp production process.

On the other hand, to increase capacity at this point would be extremely expensive: the equipment for this may take up as much as half the costs of the whole mill.

Now, however, a new way to eliminate the bottleneck has emerged. It consists of decreasing the amount of black liquor to be burned, by removing some of the lignin before burning.

The separation of lignin is not a new invention as such, but with the recent new methods the process can be improved. The problem has been the 5–10 percent of sodium in the ashes of burnt lignin – it tends to choke the boiler.

“Now the amount of sodium in the ashes, especially from lignin separated from sulphate pulp, has gone as far down as one percent,” says Ekman.

What is particularly important is that, although lignin is considered one of the most promising products of the new forest-based bioeconomy, from the viewpoint of economy its use in direct energy production continues to be significant in the starting phase

The new ligno-boost technology will also be used at the lignin separation facility being constructed at Stora Enso’s Sunila pulp mill in southeast Finland. The technology was developed in Sweden, and Stora Enso participated in the work from the beginning.

At the moment, the technology is supplied by the Finnish forest industry technology company Valmet. The EUR-32-million investment in Sunila will be taken into use during the first months of 2015.

After US-based Domtar, the Sunila facility will be the second in the world to use this technology, though obviously not the last. Stora Enso expects the facility to generate a turnover of EUR 80 million in 2017.

According to Harlin, the supply and demand for facilities of this kind will create a new market supporting the emergence of new lignin-based products.

In principle, the potential uses of lignin are almost unlimited. “You really can make almost anything out of lignin, but it’s another thing whether the production is feasible on an industrial scale and which products will be economically viable in the end,” says Ekman.

According to Harlin, there are several possible fields of use in addition to direct burning. One option is to produce pyrolysis oil to be used as fuel for ships and thermal power plants, but this requires that the sulphur content in the oil as well as its relatively low energy content are factored in.

Lignin can also be used to make thermoplast to replace plastics. However, the product has the same strong smell as a pulp mill. The smell can be removed by fractionation, but it increases costs.

Lignin is a natural glue for wood materials, and it has been used as a raw material of glues. For example, the Karatex glue has been used to glue chips and veneers to produce chipboard and plywood since the 1960s.

Another lignin-based product is polyurethane. Normally, it is made of fossil raw materials, though sometimes soybeans are also used.

Corporate investments in research are increasing

At VTT, research is carried out to produce lignin-based carbon fibres. According to Harlin, the problem is that the lignin fibres branch out in the boiling process at the pulp mill, which decreases the strength of the carbon fibres.

“We strive to produce lignin-based carbon fibres that are equivalent to those made of fossil raw materials. This way, they could be used as composites in the automotive industries, for example,” says Harlin.

Stora Enso’s goal is that the producers of special chemicals and technical materials could replace their fossil raw materials with lignin. Other uses could be found in the construction industry, for example. One potential use here are agents that prevent concrete and asphalt from setting before casting.

However, Ekman does not believe that lignin could be the kind of mass product as, say, LWC paper for the forest industry, at least in the short term. Still, it is an option for both old and new pulp mills.

“For the new ones, because they do not need all the energy recoverable from lignin. And for the old ones, which could eliminate their production bottlenecks by the separation of lignin. We need to look for profitability from many small streams, and this can be one of them,” says Ekman.

As for research on forest-based bioeconomy, Harlin sees signs that companies are taking the place of public money as financiers. “This also shows that we are closer and closer to actual production,” says Harlin.

Five facts about toilet paper – no, we’ll not run out of it

The Finnish startup Spinnova is transforming the textile industry without burdening the environment: “You can even eat our fibres”

The recent survey reveals that family forest owners in Finland would like to see the end of the debate on clear-cut fellings and continuous-cover silviculture. Natural conditions should determine felling methods and direction of #forestmanagement. https://t.co/LEMf8dDwHH